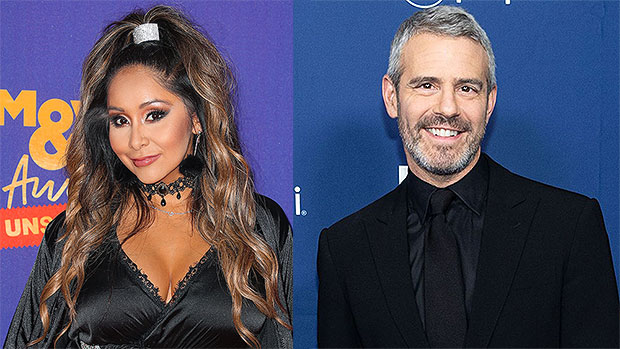 Nicole “Snooki” Polizzi and Andy Cohen are squashing their feud after he said he could never see her on Real Housewives of New Jersey in the future. The 35-year-old Jersey Shore star appeared on the 54-year-old talk show host’s SiriusXM radio show, Andy Cohen Live, on Jan. 23 and admitted she wasn’t mad about his comments, which he publicly said last year. “You were just a little sarcastic so I had to come back,” Snooki said after saying she didn’t want to be in a war with Andy, on the show.

“I’m not mad about it. I just didn’t like your little, ‘Nah, I’m good’,” she added, referring to Andy saying he could not see her being casted on the famous Bravo series “at all ever.” He went on to explain that he sees her as “one of the faces of MTV and the face of Jersey Shore,” and that’s why he said the controversial comments. “And so to me, it’s like putting Mickey Mouse in a Bugs Bunny cartoon. It’s too different. You know what I mean?” he asked.

“We’re fine. I love you,” Snooki then said, putting their alleged feud to rest.

Andy’s opinions about Snooki being the face of MTV isn’t the only reason she may not become a part of the any Real Housewives cast in the future. Another is her husband of eight year, Jionni LaValle, who hates being on camera. “He has severe anxiety and hates being infront of camera. He never liked it. He hardly lets me post pictures,” she wrote in response to a user on Twitter back in Aug. “It’s a mental health issue that i respect and choose not to push him to be on camera.”