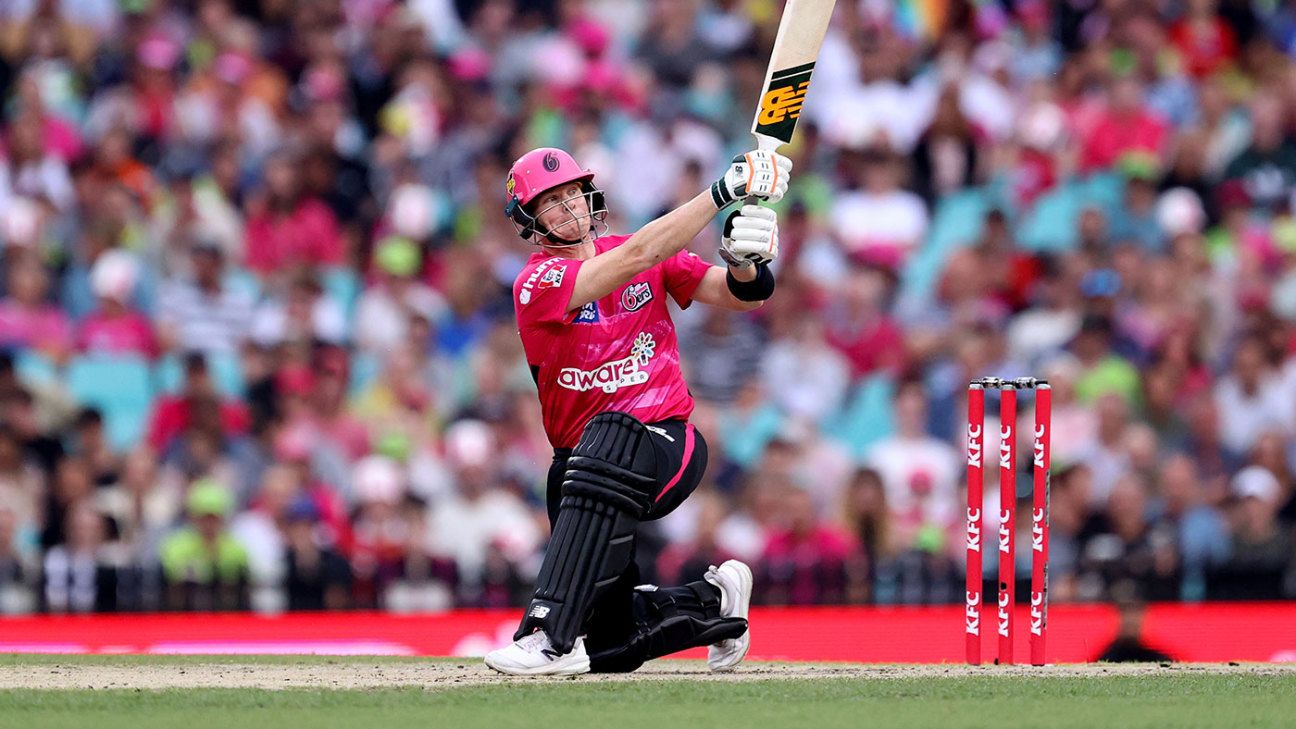 The BBL had already enjoyed a resurgent season, but Steven Smith produced one of its grandest performances in front of a packed SCG to keep Sydney Sixers in the hunt for the top spot with a crushing 125-run victory in the local derby against Sydney Thunder.
Smith followed his 56-ball hundred against Adelaide Strikers by matching that figure to the delight of the majority of the 38,757-strong crowd, after a slightly delayed start bringing the game down to a 19-over contest with rain briefly threatening to spoil the occasion, despite having battled back spasms earlier in the day.
Smith finished on a career-best 125* from 66 balls, peppered with nine sixes, as cross-town rivals Thunder had no answer as he dominated an unbeaten second-wicket of 155 with captain Moises Henriques. He became the second player in the BBL to score back-to-back hundreds after Ben McDermott.
However, the overall contest peaked with Smith’s innings. The contrast with David Warner was stark. He took 17 balls to find the boundary as Thunder never threatened to make any sort of impression on the target.

After Sixers opted to bat, Smith was quickly into his stride, carving his second ball for four, playing a superb back-foot drive against Chris Green in the second over then sweeping Daniel Sams into the stands for his first six.

The home side were briefly set back when Gurinder Sandhu struck twice in the fourth over – Josh Philippe dragging on and Kurtis Patterson top-edging three balls after being dropped – but Smith was in the zone.

There was a period of consolidation where three overs from the fifth to the seventh did not produce a boundary before Smith deposited Joel Davies straight down the ground. That marked a gear change for Smith who went to fifty from 31 balls in an over where he again put Sams into the stands.

Smith was given a life on 51 when Usman Qadir spilled a return catch having already taken a painful blow on the hand. Smith sped into the 90s with two sixes in three balls off Sandhu in the 15th over before launching Qadir over wide long-on, his second fifty taking just 25 deliveries.

Smith’s 125* was the highest T20 innings at the SCG, overtaking Shane Watson’s 124 against India in 2016 and his performances have shone a light on his omission from Australia’s T20 side, even if there were logical reasons behind it.

The Sixers’ captain had one of the best seats in the house, although he copped a few blows for his efforts. He struggled somewhat early on and was 15 off 19 balls before sending Qadir over long-on, although by and large was able to leave the heavy lifting to Smith.

In the 14th over he was struck a painful blow on the chin when a throw from the outfield bounced on the edge of the pitch and missed his helmet. In the penultimate over he was then in the firing line from Smith himself when a fiercely struck drive off Sams hammered in his thigh at the non-strikers’ end.

In the end, the third-wicket stand ended as Sixers’ second-highest in the BBL and the highest partnership for that wicket in the tournament’s history.

Warner’s return to the BBL, after a much longer gap than Smith’s, has brought nowhere near the same rewards for Thunder. There wasn’t a lot he could do about the yorker he got from Riley Meredith against Hobart Hurricanes, and he played a useful hand against Melbourne Renegades, but this was a painful innings.

He didn’t often have much of the strike – facing just 23 balls by the time he fell in the tenth over – but couldn’t get his innings going and the frustration was clear. Eventually, he spooned a catch into the leg side against the wily Steve O’Keefe as Thunder’s chase fell in a heap. Warner’s final tally was the third slowest double-figure innings of his T20 career.

Thunder have endured some significant batting struggles this season, although with one game remaining can still make the finals.

This is a watching brief at the moment, not quite a cause for major concern. For the second consecutive match, Nathan Lyon was kept on the sidelines as medical staff took a precautionary view of a knee niggle, described as a lateral meniscus irritation.

He will be assessed again ahead of Sixers’ final regular-season match against Hobart Hurricanes on Monday, but there won’t be any risks taken with the proximity of the India tour – plus the fact that Sixers are well-stocked for spinners, at least at the moment. They will have to use their bench strength when both Lyon and Todd Murphy, who bowled very tidily in this game, have departed for India. Smith will have gone, too, by then but has certainly left his mark on this year’s tournament.