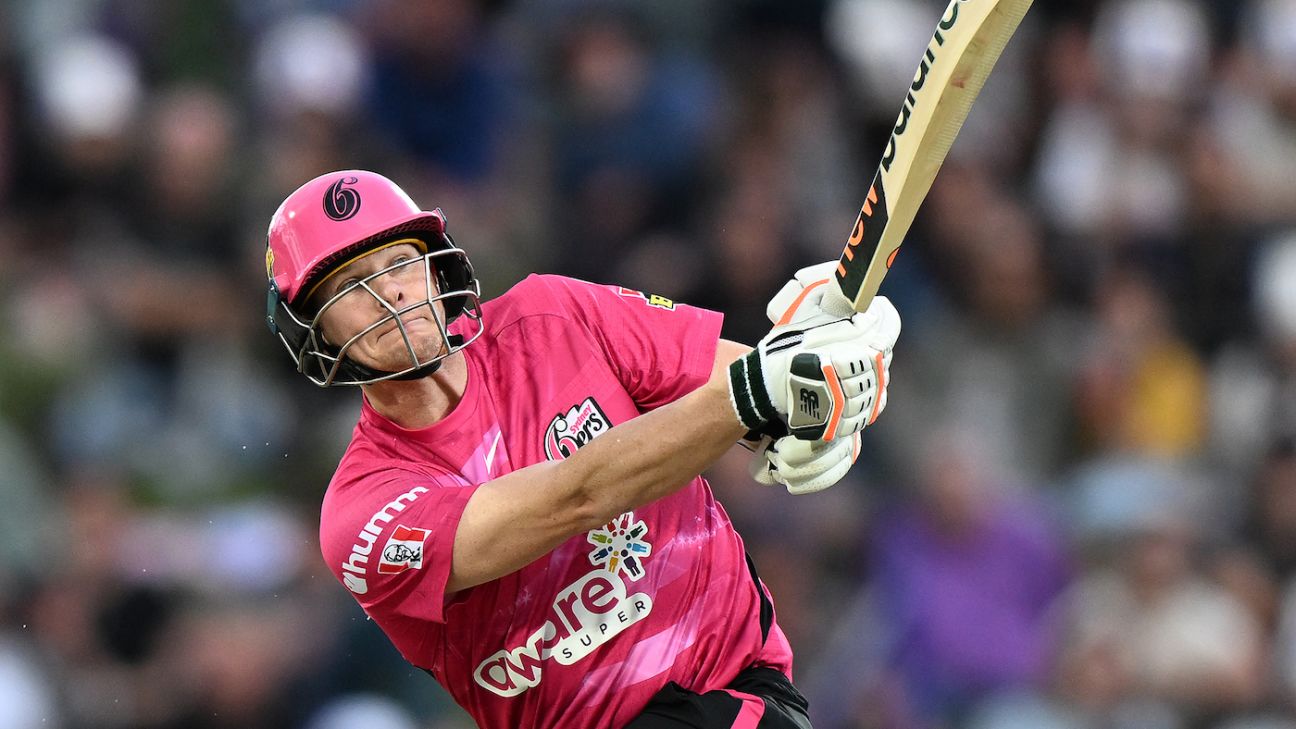 Steven Smith‘s purple patch with the bat continued as Sydney Sixers seriously dented Hobart Hurricanes’ BBL playoffs hopes with a 24-run victory at Blundstone Arena. Sixers, meanwhile, tuned up for the playoffs with their sixth straight win.
After being sent in, Sixers were led by an imperious Smith, who thrashed 66 off 33 balls marked by half a dozen sixes. Chasing 181, Hurricanes lost regular wickets to never seriously threaten despite a classy 49 from Zak Crawley.

Seventh-placed Hurricanes are two points behind fifth-placed Sydney Thunder and play their final match on Wednesday against Brisbane Heat in Launceston. Sixers had already locked the second spot on the ladder and meet Perth Scorchers in a blockbuster qualifying final at Optus Stadium.

Smith entered the match with consecutive centuries after lighting a fuse under the BBL since his much-anticipated return. There were concerns a back niggle might rule him out of this contest, but Smith seemed unaffected at the crease.

Amid an absolute onslaught, Smith appeared well on course to become the first player to hit three tons in a row in T20 history. He fell short of the record books, but once again provided a stunning exhibition of power-hitting.

Smith started with a six off seamer Joel Paris on his fourth delivery, and took on spin, too, by smashing left-armer Patrick Dooley over square leg.
There was nothing Hurricanes’ bowlers could do against a rampaging Smith, who clubbed Tim David‘s part-time spin on to the roof over deep midwicket. Another boundary brought up Smith’s half-century in just 22 deliveries with almost every delivery zinging off the sweet spot of his bat.

Hurricanes were out of answers as every Smith blow was putting their season further on the brink. But Smith fell rather tamely, lbw, when he missed a knee-height full-toss from seamer Nathan Ellis.

Smith reviewed, and was crestfallen to have been dismissed in such tame fashion. But he once again proved a point to critics in his mission to regain a permanent position in Australia’s T20I team.

Remarkably, Smith has hit 24 sixes in just four innings – six ahead of next best Tim David and Matthew Short, who have both batted in 13 innings.

Hurricanes were staring down the barrel of an enormous chase but fought back after Smith’s dismissal in the ninth over.

Not for the first time this season, it was Dooley chipping away with key wickets starting with snaring pinch-hitter Hayden Kerr after a brilliant diving catch on the boundary from Ben McDermott. He then dismissed Jordan Silk and Ben Dwarshuis to finish with a three-wicket haul in his return from a groin injury.

Dooley, a lawyer in his day job, has become something of a talisman for the attack, but an expensive 18th over paved the way for a sloppy finish by Hurricanes’ bowlers.

On a surface offering movement, veteran quick Jackson Bird found early swing and finished with 2 for 26 from three overs.

It was a solid audition for him ahead of Sixers’ trip to Perth’s pace-friendly Optus Stadium, but he was left annoyed after claiming a forward dividing catch on the first ball faced by Faheem Ashraf that was eventually deemed not out.

It failed to dampen Sixers, with quicks Kerr and Sean Abbott also bowling well under pressure to finish with two wickets apiece. Abbott’s dismissal of Faheem made him the first bowler to claim 150 BBL wickets.

It seems unfathomable that Hurricanes will miss the playoffs considering the batting firepower at their disposal. But it has mostly proven fool’s gold in a disappointing season and that proved the case again against an experienced Sixers attack.

Such a powerhouse in previous years, McDermott has been off the boil this season and came into the match with four straight single-digit failures. But he quickly reached double-figures this time with three boundaries in his first eight deliveries before falling shortly after for 13.

When skipper Matthew Wade fell for 14 in the eighth over, Hurricanes’ fortunes again fell on in-form Tim David, who has been a shining light this season. David cracked three boundaries in his first four deliveries before his dismissal in the 12th over.

Crawley ended a form slump, but it wasn’t nearly enough.