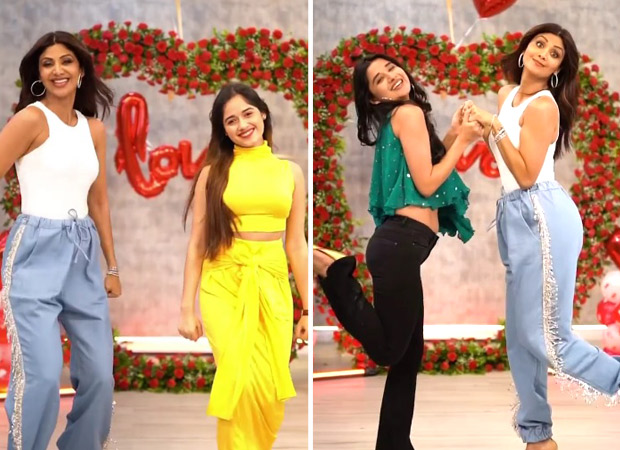 Shilpa Shetty is undeniably one of the hottest divas even at the age 46. The actress is all set to appear in the much-anticipated rom-com Hungama 2. In the film, Shilpa’s iconic songs from the ’90s, ‘Chura Ke Dil Mera’ from the film Main Khiladi Tu Anari‘s modern-day version is also there. Undoubtedly, in no time after releasing it became an instant hit among the audience.

Digital stars Jannat Zubair Rahmani and Kanika Mann joined the ‘Chura Ke Dil Mera 2.0’ challenge on Instagram reels with none other than Shilpa Shetty Kundra. Both Kanika and Jannat did a tremendous job as they grooved to some wicky steps which was too fascinating to watch.

In the video, Shilpa wore a white bodycon top along with high waist jogger pants which had shinny side stripes. On the other hand, Jannat wore a bright yellow co-ord set comprising a high neck top and a 3/4 skirt. While Kanika wore a bottle green one-shoulder top with flared black pants. Shilpa and Kanika also wore round loops in their ears.

Hungama 2 is the sequel of the 2003 cult comedy, Hungama. The film is all set for its digital premiere on July 23 on Disney+ Hotstar. The 2.0 version directed by Priyadarshan features Paresh Rawal, Shilpa Shetty, Meezaan and Pranitha Subhash in lead.

R Madhavan speaks about the kissing scene with Soha Ali Khan in Rang De Basanti; reveals that he could only think of Saif Ali...