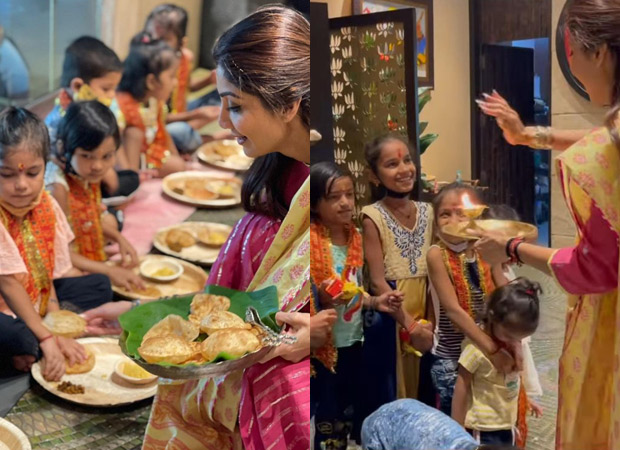 On Wednesday, actress Shilpa Shetty held an Ashtami Pooja at her home with a bunch of children. The actress took to her instagram account to share photos of little girls and boys who became ‘Kanjaks’ on the auspicious day.

The children were given stoles with ‘jai mata di’ written on them and fed halwa, chane and poori, as is tradition on the final two days of Navratras. Shilpa served them pooris herself as they sat in a line for their lunch. In another clip, Shilpa is seen doing aarti as they smiled and laughed.

Previously, Shilpa has shared photos and videos from Navratri celebrations at home. On Monday, she shared a video of herself, her son Viaan and her daughter Samisha taking part in an aarti. Sharing the video, she wrote, “My #MondayMotivation… my kids and faith. Some things can’t just be passed down to the next generation without them witnessing us doing it. It’s important to me that my kids grow up with the same values and traditions that our parents inculcated in us. Sowing the seeds of faith in both of them from a young age was something I always intended doing… because I know that faith grows stronger and becomes a lot more deep-rooted as we grow older & helps us experience life in all its glory surrendering to the almighty. Bliss Happy Monday to all of you!”

Recently Shilpa and her family were in the midst of controversy after her husband Raj Kundra was arrested for his alleged connection to a pornography racket. After spending close to a month in jail, Raj has been released on bail. Currently Shilpa is the judge of Super Dancer Chapter 4, which airs on Sony Entertainment Television.