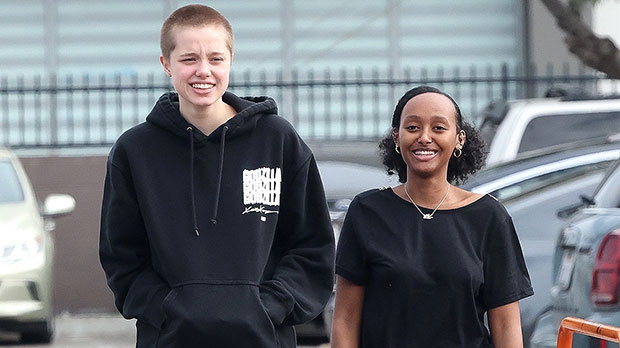 Shiloh Jolie-Pitt, 16, decided to change up her look in a big way! The daughter of Angelina Jolie and Brad Pitt was spotted sporting a brand new fresh buzz cut as she shopped with her sister Zahara Jolie-Pitt, 18, during a recent outing. She wore a black hoodie, gray shorts, and black Converse style sneakers as she walked side by side with her older sibling in a parking lot.

Zahara wore a black t-shirt, light blue jeans, and her own black Converse sneakers and topped her look off with a necklace and earrings. Both girls looked content and happy as they flashed smiles while walking by cameras. It’s unclear where they were headed but Shiloh’s new look definitely brought on a lot of attention from people.

Before she decided to get a buzz cut, Shiloh had longer blonde hair and has made headlines time and time again for her style evolution over the years. She was recently seen donning a knit cap while on a coffee outing with her mom and actor Paul Mescal in London, England. Before that, she was seen enjoying a solo outing to 7/11 and rocked a similar black hoodie to the one she wore on her latest shopping trip and matching jogging pants.

Like Shiloh, Zahara has also been seen on numerous outings with and without her younger sister. One of her most recent was at a comedy show featuring Chris Rock and Dave Chappelle. She was joined by her brother Maddox Jolie-Pitt, 21, and was dressed to impress in a long black dress with sheer sleeves. She also went shopping with her mom before the holidays when she took a trip home from Spelman College, which is based in Atlanta, GA, where she’s currently studying.

Just weeks before, Angelina attended Homecoming weekend at Zahara’s school and a source told us it went really well. “This time was so different because Zahara has made some really amazing friendships and bonds with other students on campus in just a few short months. Zahara was so thrilled to have her mom by her side while they celebrated homecoming,” the source EXCLUSIVELY told HollywoodLife.