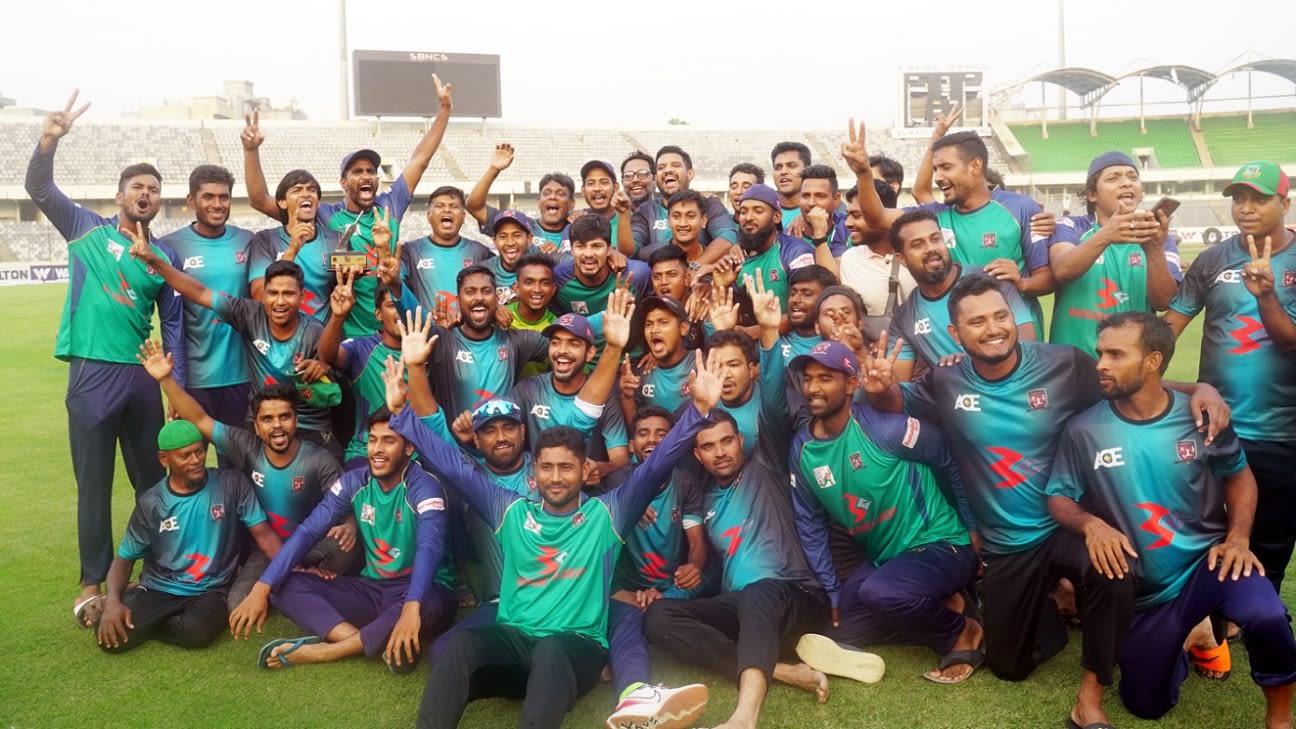 A round-up of the last week of matches at the Dhaka Premier League, as Sheikh Jamal Dhanmondi won their maiden title and Prime Bank Cricket Club’s Anamul Haque became the first batter to cross 1000 runs in a List-A tournament in Bangladesh.

Sheikh Jamal Dhanmondi Club fulfilled their decade-long quest for a Dhaka Premier League in style, when they beat defending champions Abahani Limited by four wickets in a tight contest on April 26. Nurul Hasan struck his fourth 50-plus score in a row to take them home with three overs to spare, despite the side slipping to 78 for five chasing 230.
The win took their tally to 24 points, four clear of Legends of Rupganj, who beat Gazi Group Cricketers by 196 runs on the same day. All six Super League sides have one match each on the final day on April 28, but that’s going to be a mere formality. Sheikh Jamal will get their hands on the DPL trophy after their match against Rupganj in Dhaka. It is Imrul Kayes’ second domestic trophy of the season as captain, after he led Comilla Victorians to the BPL trophy in February.

Anamul Haque‘s 1,042 runs is now the new world record for most runs in a single List-A tournament. The previous record was held by Tom Moody who made 971 runs in the 1991 season. Anamul crossed the 1000-run mark during his unbeaten 112 against Gazi Group on Tuesday. Anamul had already broken Saif Hassan’s record of 814 runs, the previous highest by a batter in a single List-A tournament in Bangladesh, on April 21.
Legends of Rupganj’s Naeem Islam has also crossed Saif’s mark by becoming the second-highest scorer in this season’s DPL with 836 runs.

But Nurul was better than Anamul in the Super League stage, scoring 357 runs that included three match-winning knocks that handed Sheikh Jamal the DPL trophy. His unbeaten 132 against Rupganj Tigers and 81 not out against Abahani made the big difference.

The most effective bowling performance in the Super League phase came from the unlikely source of Gazi Group’s Al Amin. The part-time offspinner took career-best figures of 6-22 that put Abahani out of the title running. Al Amin came in to bowl in the 27th over of the rain-shortened 36-over-a-side game. Abahani slipped from 210 for three, losing their last seven wickets for 39 runs chasing 277.

Who will be the highest wicket-taker this season? The race continues between left-arm spinner Rakibul Hasan and Sheikh Jamal’s Indian recruit Parvez Rasool, with the bowlers on 27 and 26 wickets respectively. Among the pace bowlers, Chirag Jani was the highest wicket-taker with 25 scalps while among the uncapped local pacers, veteran Masum Khan has 20 wickets.

The defining match of the season would remain Sheikh Jamal’s four-wicket win over Abahani. The defending champions had reduced them to 78 for five chasing 230, but Nurul added 72 runs for the sixth wicket with Rasool, and another 80 for the unbroken seventh wicket with Ziaur Rahman to complete the chase.

Abahani’s 142-run loss against Prime Bank, their biggest in DPL’s List-A history, in the opening Super League match set the tone for this crucial phase of the competition. Prime Bank impressed throughout the Super League but paid for dropping points during the first phase.

Khelaghar Samaj Kallyan Samity were demoted to next season’s Dhaka First Division Cricket League after they couldn’t break through from the relegation playoffs against City Club and Brothers Union.

Abahani giving away their four consecutive trophy-winning seasons since 2017-18 was a major disappointment, while Mohammedan Sporting Club and Gazi Group Cricketers, despite their big-spending budgets, couldn’t really impress, with Mohammedan nearly slipping into the relegation zone.

Among those below the age of 23, Amite Hasan, Shahadat Hossain Dipu and Akbar Ali were good with the bat while left-arm spinner Rakibul is fighting for the top wicket-taker’s spot. Left-arm quick Mrittunjoy Chowdhury was impressive as a middle and death bowler among the youngsters.

Naeem led the dad’s army with his 836 runs and 11 wickets while his Legends of Rupganj team-mate Mashrafe Mortaza finished with 19 wickets.