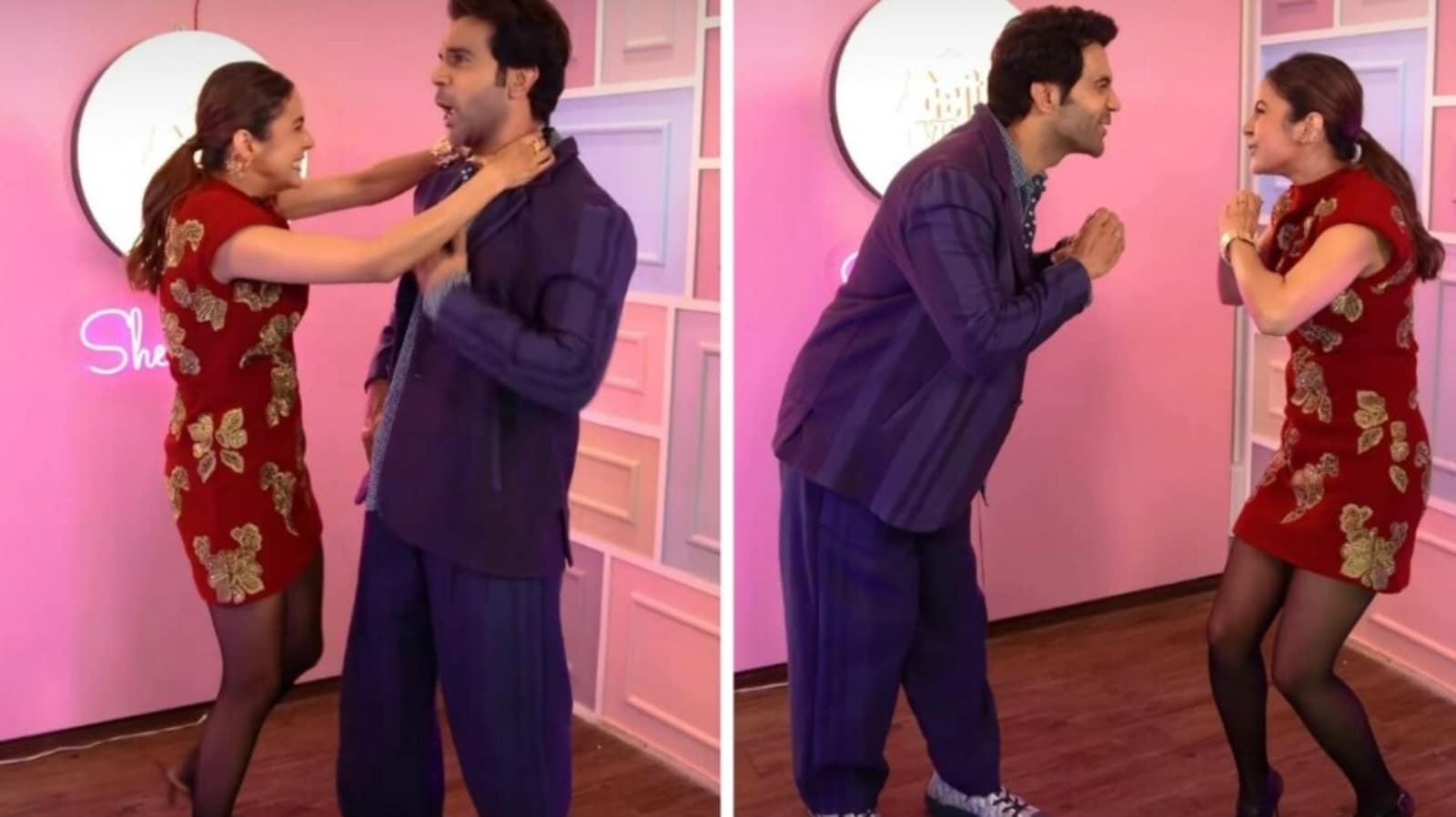 Shehnaaz Gill took to Instagram and shared pictures with Rajkummar Rao from her first ever chat show- Desi Vibes with Shehnaaz Gill. She expressed her happiness after working with Rajkummar via an Instagram post. Both of them laughed and danced to Love You So Much (I Want To Kill You) song from Monica, My Darling. Monica, O My Darling stars Rajkummar alongside Huma Qureshi and Radhika Apte, and releases on November 11 on Netflix. (Also read: Monica O My Darling teaser: Rajkummar Rao is ‘King of Angola’ as Radhika Apte, Huma Qureshi tease his story. Watch)

Taking to Instagram on Wednesday, Shehnaaz posted few pictures with her first guest Rajkummar. She decked up in maroon mini dress. Rajkummar wore a formal suit. In one of the pictures, she held his fingers while posing for the camera. Sharing the pictures on social media, Shehnaaz wrote, “Dreams do come true….. and today was one such moment when what I manifested came true. I always wanted to work with the very talented actor Rajkumar Rao & today I shot with him as my guest on my first ever chat show – Desi Vibes With Shehnaaz Gill. I am on the moon literally! Thank you so much for honouring my request @rajkummar_rao, you know you are the best! :)”

She also requested her fans, “Do not forget to watch Monica oh my darling streaming on 11th November on netflix.” Reacting to her post, one of her fans wrote, “Fly high, my girl sky is your limit (red heart emoji).” Another fan commented, “All the best Shehnaaz.”

Rajkummar shared a video on Instagram, featuring Shehnaaz. Both of them danced to Love You So Much (I Want to Kill You) on the sets of Desi Vibes with Shehnaaz Gill. Sharing the clip on social media handle, Rajkummar wrote, “Monica Shehnaaz Monica Shehnaaz, kis pe dhyaan doon? (Whom should I focus on Monica or Shehnaaz). Bohot maza aaya aapse baat karke (I enjoyed a lot after talking to you) and to dance with you on one of my favourite track (smiling face with red heart emoji).”

He further added, “Thank you for inviting me to your show, lots of love and best wishes. @shehnaazgill.” He used the hashtag ‘Monica O My Darling’ on his post. Reacting to his video, one of his fans wrote, “Now my greedy heart want this pair in a movie..They look so cute together… My girl (Shehnaaz) is rocking.”

Shehnaaz will make her Bollywood debut with Salman Khan’s film Kisi Ka Bhai Kisi Ki Jaan. The film is directed by Farhad Samji, which also s Venkatesh Daggubati and Pooja Hedge. The film is slated to release in 2023.