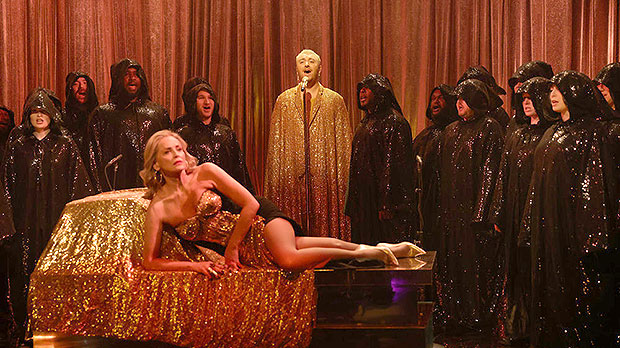 Bow down to the queen! Sharon Stone’s name was on everyone’s lips after her surprising — and bewildering — appearance on Saturday Night Live. The actress stole the spotlight during musical guest Sam Smith’s performance of his new single “Gloria” by doing nothing more than reclining on a chaise in the center of the stage. Looking like a billion bucks in a sparkling gold bustier and surrounded by a choir of robed singers, the Basic Instinct icon didn’t take long to start trending online. Check it out below!

While many fans questioned the reason for Sharon’s appearance (and obvious upstaging of Sam), a few put it together that the actress was the lead in the 1999 movie Gloria, a remake of John Cassavetes’ film of the same name. No matter the cause, it was certainly a bizarrely entertaining sight to behold.

Sharon made sure to use her time at Studio 8H well, as she also appeared in a sketch with the show’s host, Aubrey Plaza, who was taking over as emcee for the first time. Sharon had done it herself way back in 1992, when she catapulted to fame off of Basic Instinct. In the skit, a black and white spoof of classic film noirs, Sharon played the mother of Aubrey, who has an affinity for older detectives.

“When I meet a man with cataract glasses and pants up to his chest, I go head over heels,” Aubrey’s character told a detective played by James Austin Johnson. “I like the way their kisses taste like a cough, how they can’t find their glasses …” she quickly added. Sharon then entered and said she found the detective to be a “scrumptious little snack” as well. However, it was bad luck for both ladies, as the detective was soon killed off. Check it out above!

Meanwhile, Sharon wasn’t the only celebrity to crash the show. The Property Brothers Jonathon and Drew Scott, and Tony Hawk stopped by Rockefeller Center to join in on a Miss Universe sketch, which appeared to be influenced by a viral meme of the contestants screaming the name of their homeland. Portraying judges of the beauty pageant, the HGTV stars and the skateboarding legend surprised fans and brought down the house! Check it out here.