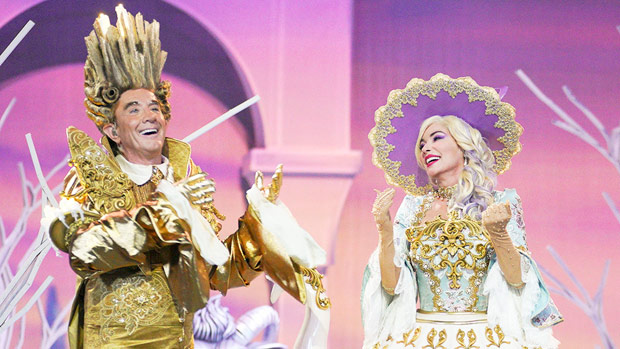 ABC is celebrating the 30th anniversary of Beauty and the Beast with an epic TV spectacle featuring some of Hollywood’s most incredible stars. Music legend Shania Twain will be playing the role of Mrs. Potts in the TV special. She does a complete transformation to play the wise teapot.

Shania’s Mrs. Potts costume is the definition of extravagant. Part of Shania’s skirt is shaped like an actual teapot, with a spout and everything. The teapot is purple and white with stunning gold detailing. Beneath the teapot is a purple and gold skirt.

The upper portion of the costume is a fitted bodice in a gorgeous light blue hue with gold embellishments. She tops her Mrs. Potts costume off with a purple and gold hat. Shania is rocking blonde hair for her special with purple highlights.

Mrs. Potts’ adorable son Chip is played by Lea Abelo Perry. He has a teacup costume as well. They are part of the amazing ensemble cast that includes H.E.R. as Belle, Josh Groban as The Beast, Martin Short as Lumiere, David Alan Grier as Cogsworth, and more.

The role of Mrs. Potts was originated by the late Angela Lansbury in the 1991 Disney animated movie Beauty and the Beast. In addition to voicing the role of Mrs. Potts, Angela performed the title song, which won the Academy Award for Best Original Song. Emma Thompson played Mrs. Potts in the 2017 live-action movie.

When ABC announced that she had been cast as Mrs. Potts, the country singer took to Instagram to celebrate. “I am unbelievably honoured… and excited… and all of the emotions(!!) to announce that I will be joining the cast of #BeautyAndTheBeast30th to play the part of my favourite character – Mrs. Potts,” she wrote. “And of course, I would be remiss if I didn’t pay tribute to the iconic Angela Lansbury, I mean she IS Mrs. Potts and the reason why this character is so beloved. To follow in the foot steps of such an icon is a huge honour and I hope to do the part justice.”

Shania Twain’s Siblings: What To Know About Her Brothers, Sisters, & The Family Tragedy That Kept Them Together

Beauty and the Beast: A 30th Celebration will feature live-action performances woven into an airing of the animated film. The special will air December 15 at 8 p.m. on ABC.