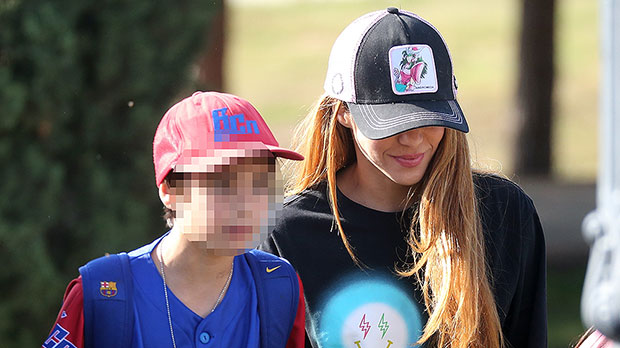 Shakira was seen for the first time in public since her ex Gerard Piqué kissed his new girlfriend Clara Chia Marti after one of his soccer games. The pop star stepped out to support her son Milan, whom she shares with Gerard, at the 9-year-old’s soccer game in Barcelona on Friday, Nov. 11. Rocking a sweatshirt and sports cap in support of the young athlete, Shakira looked quite chic in her comfortable gear.

The “Hips Don’t Lie” hitmaker has been laying low since she announced her separation with Gerard in June. A source EXCLUSIVELY told HollywoodLife that the smooch between Gerard and Clara, who started seeing each shortly after the split, added to Shakira’s seclusion, as she was upset at such a PDA moment. “Shakira can’t believe Gerard would do something like this so soon after their break-up,” said the insider. “She understands that people move on after relationships and although she wishes she didn’t have to see those kind of things she knows that she lives in the public eye and there’s no way of avoiding it.”

The source went on to say that Shakira, who also shares son Sasha, 7, with Gerard, has been doing all she can to keep things amicable between the exes for the sake of their kids. “Her kids are her first priority and even though they had a pact to not go public for a year after their break-up, she can’t control what he does and she knows it was bound to happen at some point.”

Shakira and Gerard met back in March 2011 on the set of Shakira’s music video for the World Cup anthem, “Waka Waka (This Time for Africa).” Rumors of an impending split have recently surrounded the pair after the Spanish news outlet El Periodico reported Gerard had left the family home in Barcelona and was living by himself. Shakira’s latest single called “Te Felecito” may have fanned the speculation as well, as the lyrics included, “For completing you I broke into pieces/They warned me, but I did not pay attention. Do not tell me you’re sorry, that seems sincere, but I know you well and I know you lie.”

Although the pair kept very private throughout their relationship, a guest appearance by Shakira on the podcast Planet Weirdo with Holly H in February may have signaled trouble was brewing. The “Hips Don’t Lie” hitmaker said that she and Gerard had a difference of opinion on punctuality. “My poor husband, slash boyfriend, slash baby daddy, whatever you want to call him, he has to wait up for me so long. He’s tired of waiting up,” she explained. “‘Cause Colombian time is not the same as Catalonian time, Spanish time.”

Gerard Piqué: 5 Things To Know About Shakira’s Former BF & Father Of Her 2 Children