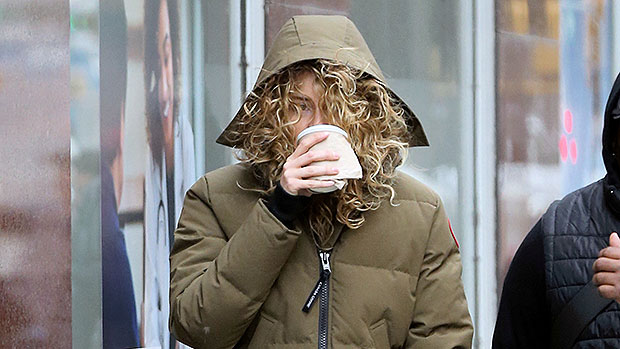 Curly hair, don’t care! Shailene Woodley, 30, hid her face behind a bevy of natural curls while filming Three Women in NYC on Wednesday, April 27 — just days after PEOPLE reported that the actress had split from former fiance, NFL star Aaron Rodgers, 38, for a second time. In photos obtained by HollywoodLife, Shailene looked less than thrilled when she was spotted on set, sipping a cup of coffee to keep warm in the currently brisk temperatures of the Big Apple.

Wearing a long brown puffy winter coat, Shailene pushed her blonde super curly locks in front of her face as she walked along the busy New York City street. In the first photo, Shailene sipped a cup of coffee with one hand. The other hand was noticeably clenched in a fist, indicating that she was not very comfortable with being photographed while at work. In the second photo, however, Shailene appeared more relaxed and even gave a slight smirk, keeping her cool while doing what it took to keep warm.

As previously reported, Shailene and Aaron ended their engagement in February after getting together in 2020 during the initial Covid-19 lockdown. She confirmed their engagement just one year prior to their split in February 2021 on The Tonight Show Starring Jimmy Fallon. When asked by Jimmy if it were true, Shailene said, “Yes, we are engaged. But for us, it’s not new news, you know, so it’s kind of funny. Everyone right now is freaking out over it and we’re like, ‘Yeah, we’ve been engaged for a while.“

Shortly after calling it quits this past February, the two seemingly got back together and were seen being very affectionate with each other on numerous occasions. In March, a source told HollywoodLife EXCLUSIVELY that the two were “working on it,” and added, “So, as far as things are concerned about being engaged still or just dating, they called off the engagement and have different feelings about where they are at. In her eyes, they are working on it and will get back there if he continues to focus on her the way she needs. In his eyes, he still feels like they are engaged, but he is playing by her rules because he wants her back.”  That was short-lived, however, as the recent reports state that it is over for good (again).

HolllywoodLife reached out to reps for both Shailene and Aaron. We have not heard back from either, yet.