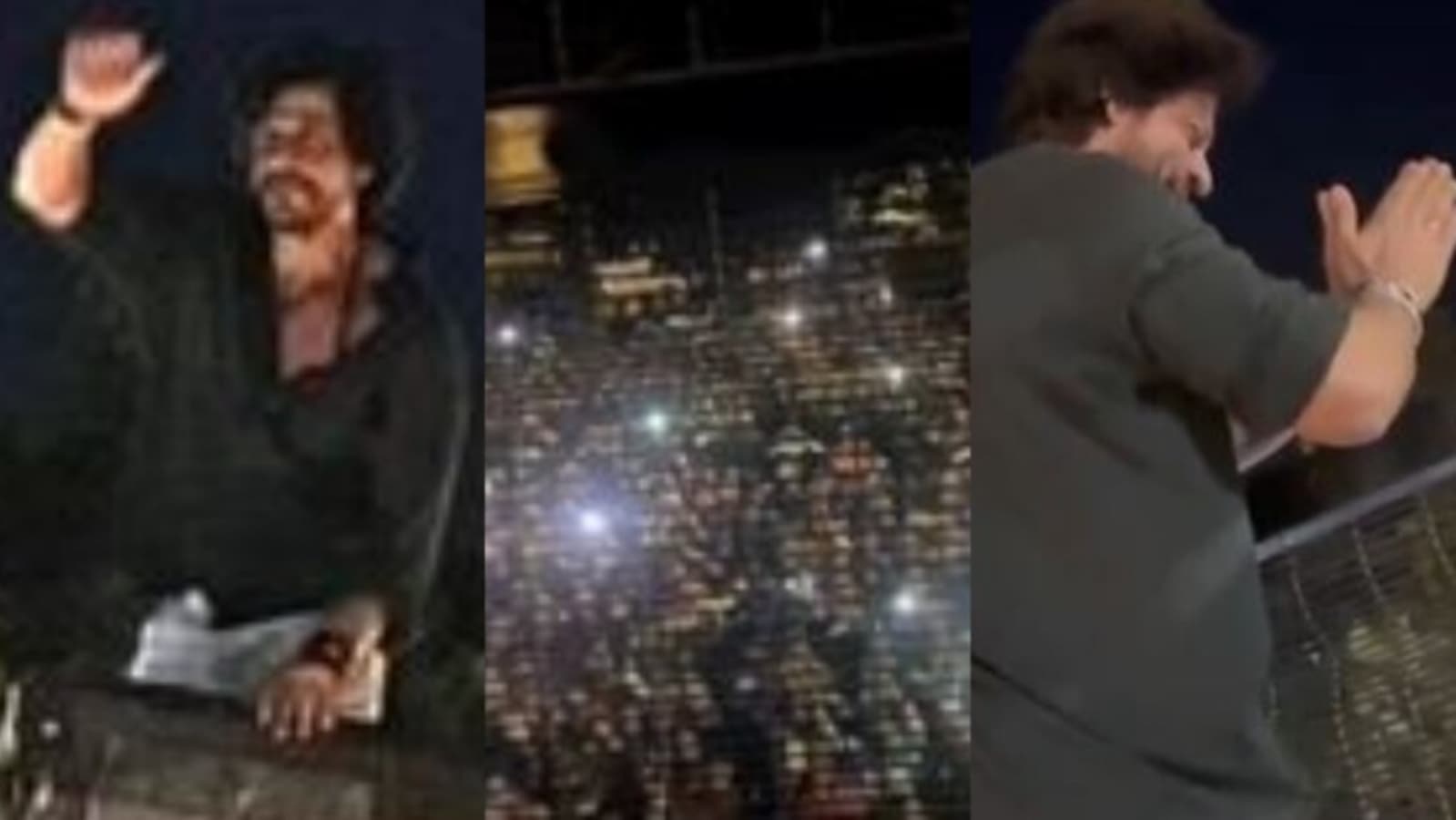 Actor Shah Rukh Khan stepped out of his Mumbai home on Sunday and surprised his fans who gathered outside Mannat. The actor stood on the balcony at Mannat and greeted his fans. Several videos and pictures of the actor surfaced online. Shah Rukh also shared a post thanking his fans. (Also Read | Shah Rukh Khan responds to fan who asked why actor didn’t come outside Mannat as he was waiting. Here’s what he replied)

In the clip, hundreds of people were seen gathered outside Mannat. Shah Rukh came on the balcony dressed in casuals–black T-shirt and denims. The actor waved at his fans, folded hands, flashed the thumbs-up sign and also blew kisses. He also struck his signature open-arms pose, amid cheers from his fans.

Reacting to the videos, fans took to social media platforms to praise Shah Rukh. A person wrote, “Our Moon blessed fans outside Mannat tonight with his beautiful presence @iamsrk love you so much.” “It’s not his birthday but just an ordinary Sunday of a week at Mannat… This is not a Stardom it’s SHAAHDOM,” read a tweet.

“Our #Pathaan came out to greet fans outside Mannat,” said another person. “The last of the stars,” hailed a fan. “This video of King Khan today at Mannat is all hearts,” wrote a fan on Twitter. “It wasn’t 2 November or any festival. Still the crowd was in such big numbers. The popularity of King Khan,” tweeted another fan.

Shah Rukh also tweeted a video recorded from inside Mannat. He wrote, “Thank you for a lovely Sunday evening… sorry but I hope ki laal gaadi waalon ne apni kursi ki peti baandh li thhi (those in the red car had put on their seat belts). Book your tickets to #Pathaan and I will see you there next…”

Shah Rukh’s appearance on his home’s balcony comes a day after a fan said that he was waiting outside Mannat for the actor. Taking to Twitter on Saturday, Shah Rukh held an Ask Me Anything session.

A fan tweeted their selfie clicked outside Mannat and wrote, “@iamsrk #AskSRK wait kar raha tha bahar kyu nahi aaye (I was waiting outside why didn’t you come out)?” Shah Rukh replied, “Feeling lazy want to chill in the bed yaar.”

Fans of Shah Rukh will see him next in Pathaan opposite Deepika Padukone. The film also stars John Abraham, Dimple Kapadia, and Ashutosh Rana in pivotal roles. It will hit the theatres on January 25. Directed by Siddharth Anand, Pathaan is part of Aditya Chopra’s spy universe.