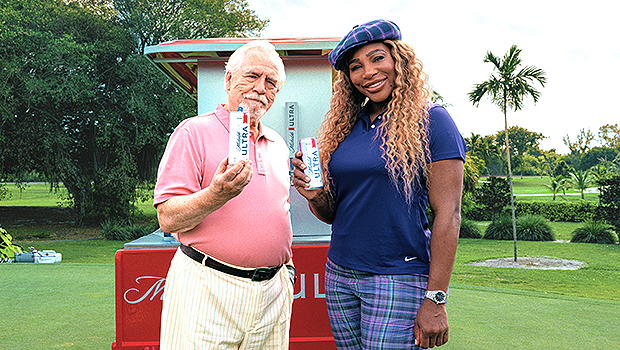 More than forty years after Bill Murray, Chevy Chase, Rodney Dangerfield, and Ted Knight made what ESPN once called “perhaps the funniest sports movie ever made,” Michelob Ultra takes Super Bowl viewers back to Caddyshack in its commercial for 2023. For the spot airing during Super Bowl LVII on Feb. 12, Michelob Ultra has recruited a new group of members for the Bushwood Country Club: Serena Williams, Succession’s Brian Cox, soccer star Alex Morgan, boxer Canelo Alvarez, and former quarterback-turned-commentator Tony Romo.

In the first teasers for the Super Bowl ad, Serena channels Chevy’s Ty Webb by using her golf club like a pool cue. Brian Cox, likely taking on the gruff curmudgeon role of Ted Knight’s Judge Smalls, tees off just as Kenny Loggins’ “I’m Alright” begins to play. In the teaser featuring Romo, the former quarterback does his best to recreate Bill Murray’s Carl Spackler, recreating the “Cinderella-story” scene involving some of the country club’s flowers. “The crowd is deadly silent,” he says, recreating Murray’s drawl, “Young, Cinderella story happening right in front of our eyes, from a quarterback, ready to become a tournament champion!”

Another teaser shows Canelo driving a red beverage golf cart stocked to the brim with Michelob ULTRA, while a fourth shows Alex pouring herself a cold Michelob ULTRA from the tap in her bag. Each of the teasers features a QR code that fans can scan. When they do, as part of Michelob ULTRA’s partnership with Instacart, fans will be taken to a shoppable Michelob ULTRA page, where they can stock up on Michelob ULTRA for the game — complete with free delivery where available!

“Anheuser-Busch has a long history of delivering big for fans during the Super Bowl, and this year is no exception,” Anheuser-Busch chief marketing officer Benoit Garbe said in a press release. “As we’ve been doing for decades, A-B will once again lead the alcohol category with total minutes of in-game creative delivered by our iconic and high-growth brands.”

It appears that Michelob Ultra will continue its streak of star-studded sports spots that happen to reference classic cult movies for the Big Game. In 2022, the brand paid tribute to The Big Lebowski in a bowling-themed spot that featured Serena Williams, Alex Morgan, Peyton Manning, Jimmy Butler, Nneka Ogwumike, and Brooks Koepka. Steve Buscemi appeared as the manager of the bowling alley, giving Lebowski fans an alternative timeline where Donny bought the bowling alley to live happily ever after…with an endless supply of Michelob ULTRA, Michelob ULTRA Pure Gold, and Michelob ULTRA Organic Seltzer.

Ronnie Hillman: 5 Things To Know About The Former Broncos Player Dead at 31