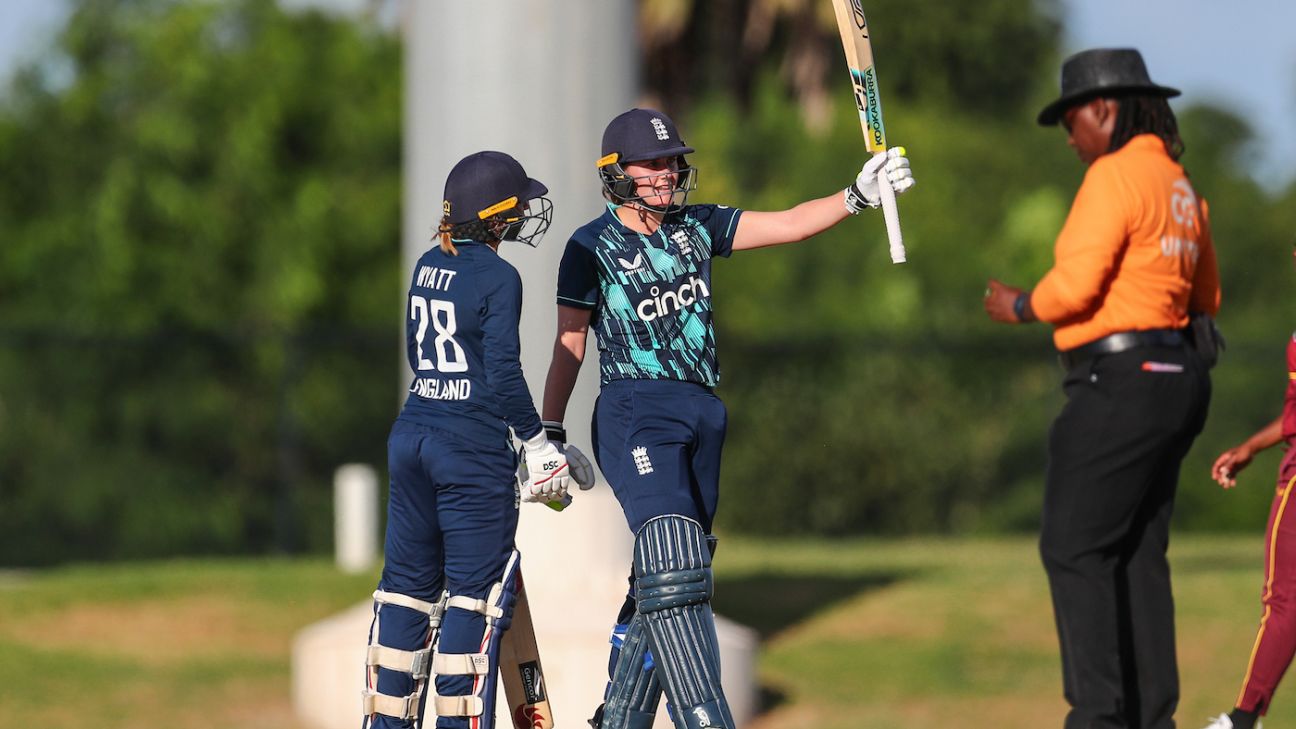 Brisk half-centuries from Nat Sciver and Danni Wyatt, and a four-for from offspinner Charlie Dean, powered England to a 142-run win and a 1-0 lead in the three-match series against West Indies. England posted 307 for 7 after being put in to bat and bundled out the hosts for just 165 in 40.3 overs as Dean took her fourth four-for in just her 20th ODI.

England scored at run a ball in the initial overs but slowed down after Alice Capsey was caught behind for 17 and Sophia Dunkley fell for 8 to Chinelle Henry. Sciver kept the innings on track with partnerships of 42 with Tammy Beaumont, 46 with Heather Knight, and 103 off just 95 balls with Wyatt to propel England to a huge score.

Beaumont was the enforcer during the third-wicket stand with three fours, while Sciver relied on ones and twos initially before hitting three boundaries in five balls to push the run rate towards 5.50 again. Medium-pace bowler Aaliyah Alleyne then had Knight caught behind for 16 before Wyatt and Sciver started hitting boundaries regularly from the 33rd over.

Sciver fell 10 short of a hundred when Henry came back and had her caught in the 40th over, but Wyatt followed that with two sixes off offspinner Sheneta Grimmond in the next over before she also fell to Henry for a 60-ball 68.

Amy Jones, who hit Henry for three fours in the 46th over, and Sophie Ecclestone put on a quick 45-run stand off 41 balls to take England past 300.

West Indies were dented early in their chase when Kate Cross broke the opening stand in the third over and Hayley Matthews retired hurt with the score on 21. The 63-run stand between Kycia Knight and Rashada Williams was the only substantial partnership for the hosts and it ended when Williams was run-out by Sciver for 34 in the 20th over. Dean then triggered West Indies’ slide by dismissing Shemaine Campbelle for a duck, and Kycia Knight fell to her namesake for 39 just past the hallway mark. Matthews returned to bat when they were 105 for 4 and struck a quick 34 off 32 with five fours before falling lbw to Lauren Bell. Dean took three of the last five wickets to wipe out the West Indies tail.

“Both facets of the game [batting and bowling], we didn’t do what we wanted on a decent pitch and England was able to capitalise on it,” Matthews told CWI Media after the loss. “We’re going back to the drawing board and see what we can improve on in the next game. Our powerplay was pretty good but we let a little too many runs go by in the middle overs. It was good to see the partnership between Kycia and Rashada and I hope we can get a few more of those.”

There was a moment of concern in the field for England when Capsey injured her left shoulder. She was taken to hospital for scans.

The next game is also at the Sir Vivian Richards Stadium in North Sound, Antigua on December 6.