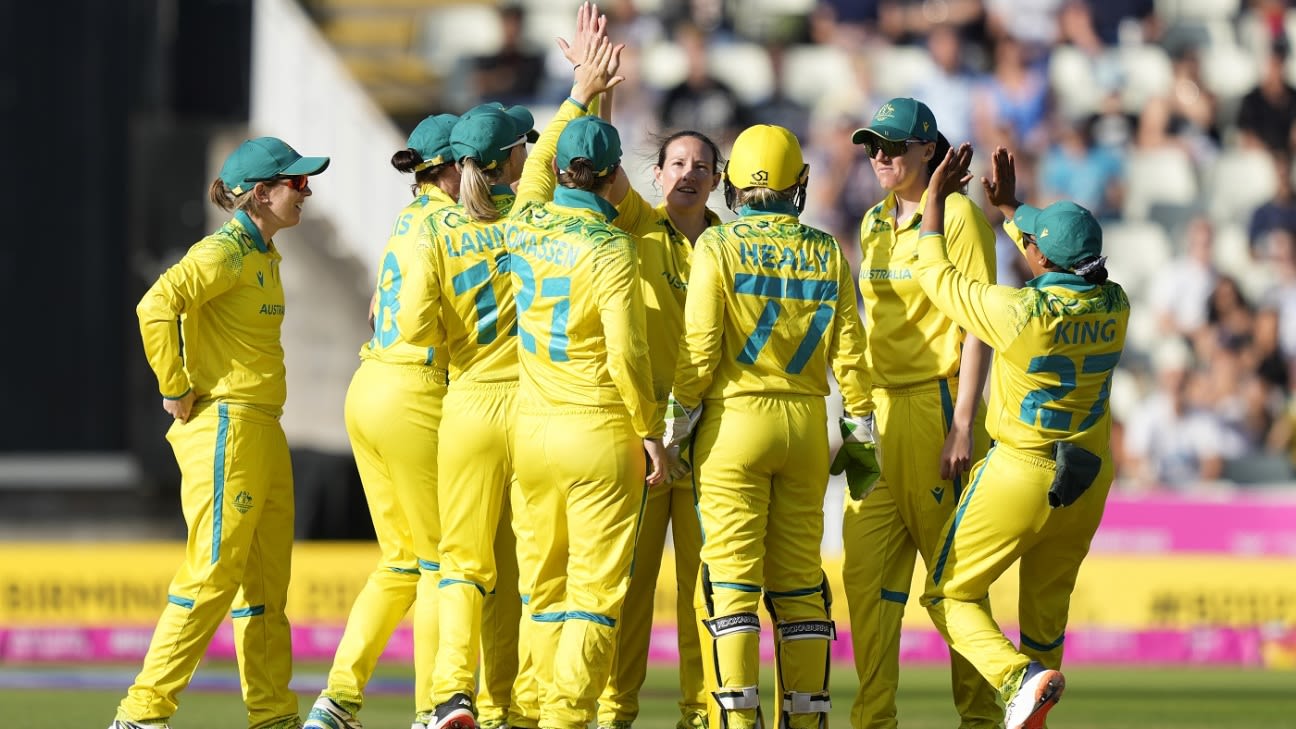 Megan Schutt‘s three wickets and another steadfast display from their batters saw Australia to victory against New Zealand in the second semi-final of the Commonwealth Games.
New Zealand were left to rue several missed chances after taking the contest to the reigning T20I and ODI world champions. But, after Schutt made early inroads, Australia’s batting depth withstood the pressure through a fifty stand from Beth Mooney and Tahlia McGrath and a signature cool-headed knock from Ashleigh Gardner to win by five wickets.
Australia will play India, who defeated England by four runs in Saturday’s earlier semi-final, for the gold and silver-medal places while New Zealand will play for bronze against the host nation.

Schutt made an immediate impact when she had Suzie Bates, second behind only India’s Smriti Mandhana on the tournament’s run-scoring list, out for a first-ball duck playing onto her stumps.
Georgia Plimmer, 18 years of age and making her international debut, came in at No. 3 ahead of Amelia Kerr and managed to overturn an lbw decision off Schutt’s next ball, full and darting in from outside off to rap the front pad, when replays showed it was missing leg stump.

Plimmer managed to add 17 runs before Schutt struck again with a brilliant legcutter which enticed her forward then clattered into off stump. At the end of the powerplay, New Zealand were 39 for 2 and, after 10 overs, they had stretched that to 63 for 2. Schutt later had Brooke Halliday caught at deep midwicket by Mooney – who also ran out Maddy Green with a blistering direct hit from mid-off on the last ball of the New Zealand innings – to end with 3 for 20 from her four overs.

Shortly after the halfway point, Sophie Devine survived an Australia review for lbw on umpire’s call on impact when McGrath beat her attempt to slog. Devine batted well for her 48-ball 53, passing a half-century with back-to-back pulls for four and a thunderous six. Devine’s business-like, brief raising of her bat in acknowledgement of the Edgbaston crowd’s applause suggested there was more work to do.
It would have to be done by someone else though after she fell two balls later, attempting a similar shot but, without the same power behind it, Mooney swallowed the catch at deep backward square. Kerr reached 40 from 36 balls before she became the first of McGrath’s two wickets, skying a catch to Darcie Brown at backward point. McGrath also bowled Lea Tahuhu with an excellent yorker to help contain New Zealand to what looked like a below-par 144 for 7.

Tahuhu good to leave out

Australia’s run-chase was off to a shaky start when Tahuhu had Alyssa Healy caught down the leg side by young wicketkeeper Isabella Gaze for just 14, continuing a lean run with the bat dating back to her ODI World Cup-winning knock in April. Tahuhu then bowled Meg Lanning with a full, slower ball that ricocheted off the front pad and onto the stumps in the perfect riposte to being clubbed over the deep midwicket rope, not to mention seeing Lanning dropped by Kerr at backward point off the first ball she faced.
McGrath and Mooney – the latter dropped on 6 by Gaze off Tahuhu’s bowling – steadied Australia. The pair had lifted their side with an unbroken third-wicket partnership of 141 after a similarly precarious start in their final group game against Pakistan, and this time put on 56 together. McGrath received a second life on 14 when Hannah Rowe put down an easy catch at mid-off from the bowling of Kerr, and when she was run-out by an excellent throw from Kerr at backward point to Gaze, Australia needed 61 off 56 balls.

When Mooney holed out to Rowe at deep cover, Tahuhu had her third wicket. Having been left off New Zealand’s central contracts list and only called up to the Commonwealth Games squad after Jess Kerr and Lauren Down pulled for injury and wellbeing reasons respectively, the 31-year-old Tahuhu showed she still has plenty to offer.

Australia’s considerable batting depth came to the fore once more to see them home. With five overs remaining, they needed 34 runs and when Devine had Rachael Haynes brilliantly caught by a diving Bates at long-on it went down to Gardner and Grace Harris to see them home.

Gardner, whose only previous knock at the Games had been an unbeaten 52 against India, and Harris, who struck an impressive 37 off 20 from No. 7 in the same match, finished unbeaten on 19 and 8 respectively to reach the target with three balls to spare.