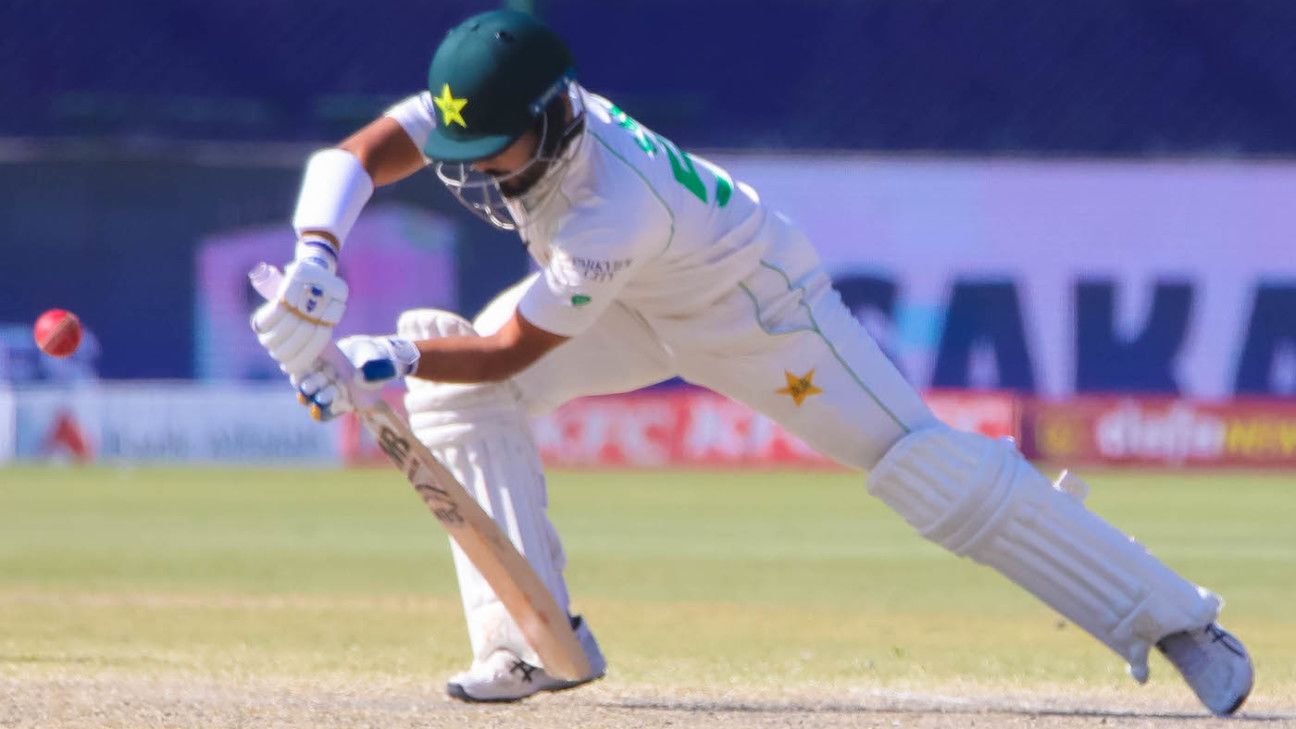 The Karachi Test headed towards a potentially exciting finish, as Sarfaraz Ahmed and Saud Shakeel rescued Pakistan from 80 for 5 to add an undefeated 99 runs, as New Zealand went wicketless in the second session. That left the hosts 140 away from their target of 319, while the visitors were two wickets short of getting into their tail and another three from victory. Officially, 31 overs remained on the final evening for either of that to happen.

From what was evident, the idea was for Shakeel – on 27 off 129 balls – to bat deep and play anchor, even as Sarfaraz – on 65 from 99 – remained proactive and garnered runs at the other end rather quickly. Overall, it was a quiet session with the bat, with Pakistan chopping a further 54 runs off their target in 24 overs.

Ish Sodhi bowled eight overs in a row after lunch, while Tim Southee bowled himself for five, as New Zealand hedged their bets and went with both pace and spin to attack Pakistan. Sodhi went from over the wicket to the right-hander Sarfaraz, and around the stumps to left-hander Shakeel, but didn’t quite get a lot of purchase from the track. The ball did turn from the rough, but Shakeel dealt with that by getting a good stride right to the pitch of the ball or, if he had to go on the back foot, he made sure he was positioned outside the line of off stump to avoid the lbw.

Southee got a hint of reverse swing away from Shakeel when the session had begun, but like in the first innings, the batter remained content to keep letting go almost all deliveries that arrived outside off. New Zealand’s captain then tried something different by placing a short leg and leg slip, and bowling short, but Shakeel remained unmoved.

Hardly any chances were created throughout the session, with the odd ball at best falling short of the slip fielder. The runs kept ticking over, as Sarfaraz got to his fourth Test fifty in a row – all made in this series – with his trademark paddle sweep off Sodhi, fetching the ball from outside off to get four to deep square leg. At the other end, Shakeel quietly crossed 20 for the tenth successive time since his debut last month.

This followed play from the morning, when New Zealand seemed to have made solid strides towards victory as Michael Bracewell and Sodhi struck thrice together. But much of that was down to Pakistan’s batters either giving their wickets away or being unlucky.
The signs of the first one came in the ninth over, when Imam-ul-Haq drove hard at a full delivery outside off from Sodhi, but it turned in to beat the inside edge, the stumps and the wicketkeeper. Despite that, Imam was adventurous against Sodhi soon after.

Come the 13th over, Imam tried to negate Sodhi’s turn into him from the rough outside off by skipping down to drive. Instead, he was beaten in flight and just clean bowled. As a result, for the third time in four innings this series, he was out after charging down the pitch.

Babar Azam then steadied Pakistan with Shan Masood. Babar began busily, smashing five fours in an eight-over period starting from the 15th. Four of those came on the leg side, and three in the region between midwicket and mid-on.

Masood, at the other end, looked calmer, happy to nudge it around after starting the day with two off-side fours. There was a nervous moment for him when Bracewell found the outside edge in the 23rd over, only for the ball to sneak between the wicketkeeper and slip. But just three balls later, Babar inside-edged Bracewell behind to Tom Latham, who did well to move to his left despite being blinded by the batter getting across and deep in the crease.

By then, the odd ball had started to keep low too, often shooting and skidding off the pitch. Despite that, Masood decided to jump out of his crease in Bracewell’s next over, and ended up caught by Kane Williamson moving to his left from mid-off.