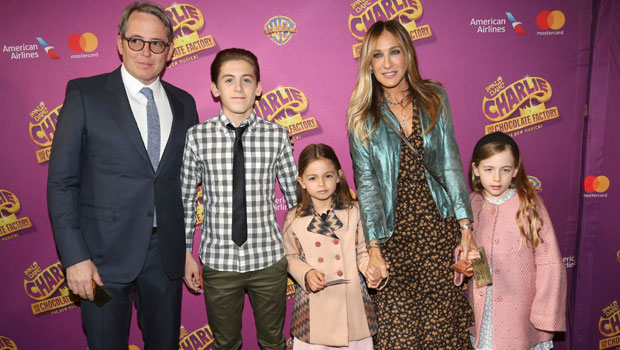 Carrie Bradshaw’s love life has endured its fair share of trials on Sex and the City, but the same cannot be said for her real-life counterpart, Sarah Jessica Parker. The actress, 56, has been married to actor Matthew Broderick since the late 1990s. Despite their highly-publicized Hollywood careers, the two have long been private about their marriage; thus, it may come as a surprise that they share three children together.

The longtime couple share son James, 19, and twin daughters Tabitha and Marion, both 12, together. In September, SJP shared rare photos of her brood on Instagram alongside a poem, reflecting on how quickly time passes as her son heads off to college, and her daughters to 7th grade. “Gutted at the time passed. Passing. Exhilarated by the possibilities that await them,” she wrote, in part.

Learn more about James, Tabitha, and Marion below.

SJP welcomed her first child, James, with Matthew on October 28, 2002. The 19-year-old graduated high school in May, per an Instagram post shared by a proud SJP. Per his own Instagram account, James is now a freshman at Brown University in Rhode Island, which is not too far off from his native New York. On his 19th birthday in October, his mom penned a poem for him on Instagram.

The actress wrote, in part, “New adults making lasting impressions. Opening his still young eyes. New thoughts. New books. New and different mornings. On this one, it’s bittersweet. Not to be with him. To wish him the most happiest of birthdays.” While speaking to Entertainment Tonight in 2019, SJP admitted that she wasn’t fully prepared to send James off to college.

“I can’t know; I can’t imagine what that feeling is to say goodbye to a child and hope you’ve left them with everything they need, here and here,” she said, pointing to her head and heart. SJP added that she hoped to impart a hunger for curiosity, and the knowledge that success isn’t the most important thing, to her children as they go off into the world.

“What I want to tell them is curiosity is the gateway to all sorts of things you might never have imagined,” she said. “And success is not the destination point for me and I don’t want them to focus on success because I think it’s come to me too much. The destination is having experiences, learning how to be with other people and what are coping mechanisms in a challenging day?”

SJP and Matthew welcomed twin daughters Tabitha and Marion via surrogate on June 23, 2009. The actress welcomed her first child at the age of 37, making it more difficult for her conceive more children after James’ arrival. Their surrogate, a woman named Michelle Ross, gave birth to the now 12-year-old twins in Ohio.  “I only got to give birth once,” SJP said of her surrogacy journey, per Infertility Aide. “I would give birth as often as I could, if I could.”

Michelle’s pregnancy was plagued by media frenzy. ABC News reported that the surrogate had been hounded by paparazzi and tabloids amid her pregnancy, so much so that SJP worried for her health. “The most unsavory things have been done,” SJP told Access Hollywood that year. “She’s had her phone hacked, her personal computer information hacked, she’s had threats against her and true harassment.”

The actress added, “It keeps me up every night. It’s really incredibly upsetting to think of her so far away and me not being able to do something, beyond what I’m legally allowed to do.” In an interview With Vogue in 2010, SJP reflected on meeting her twins for the first time, calling the surrogacy process “different” but “equally extraordinary.”

“Meeting your children rather than giving birth to them, it’s as if, um, it’s — suspended animation,” she said. “The gestational experience is gone. It’s as if everything else disappears for a moment, and the world goes silent and — I can’t explain it except to say that nothing else existed.” She later added, “Time stands still. It’s so different, and equally extraordinary. I am very poor at describing it. But it’s amazing.”

Hugh Hefner’s Kids: Facts About His 4 Children From 2 Relationships