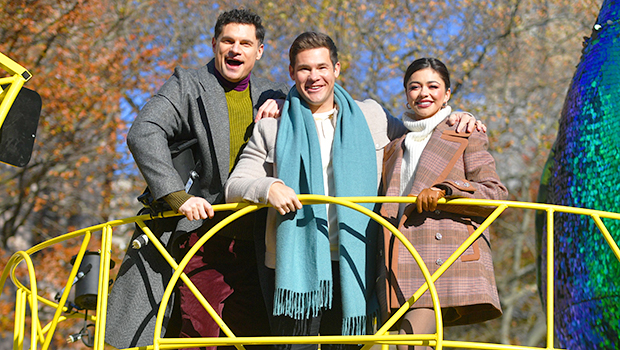 Make sure there’s an extra seat at the table this year for Bumper! Adam Devine reunited with Sarah Hyland during the 2022 Macy’s Thanksgiving Day Parade on Thursday (Nov. 24), bringing harmony, humor, and a little bit of German perfection. Adam, 39, Sarah, 31, and Flula Borg took part in the Turkey Day extravaganza to promote Pitch Perfect: Bumper In Berlin, the Pitch Perfect spin-off series on NBC’s streaming platform, Peacock. In the spirit of the acapella mash-ups, Flula, Sarah, and Adam melded NENA‘s “99 Luftballoons” (aka “99 Red Balloons”) and A-Ha‘s “Take On Me.” Sarah matched her co-stars’ energy and vibrancy in the performance — and looked great while doing so.

For Sarah, the 2022 Macy’s Thanksgiving Day Parade caps off a year where she finally married Wells Adams after a three-year engagement, stretched out mainly due to COVID. “We were supposed to be married twice over the past three years already,” Well,s 38, told HollywoodLife EXCLUSIVELY at the start of the month. “So I think the wedding, for us, was really just a celebration for everyone else, to have them all come and celebrate our love was just really special.”

Both the Macy’s Thanksgiving Day performance and the new series is a treat for Modern Family fans, as Bumper In Berlin sees Sarah (who played Haley Dunphy on the ABC series) pair up with Adam (who played Andy over three seasons of the show) again. This time, Sarah plays Heidi, Bumper’s assistant, as he heads to Germany after one of his TikToks goes viral in the European company. While in Berlin, Bumper hopes to resurrect his music career, while try not to fall in love with Heidi – all while dealing with a pop diva rival played by Jameela Jamil.

“To think this journey began over 15 years ago – from the discovery of Mickey Rapkin’s book, to three incredible films, and now a television series,” executive producer Elizabeth Banks said in a statement, per Deadline. “We could never have imagined the life that this story would take on. It was really important to us that Bumper in Berlin be recognizable to the fans, for its irreverent comedy and phenomenal music, but also entirely distinct from what you’ve seen before. We wanted to honor The Barden Bellas and the Pitch Perfect world, while expanding into a fresh and brilliantly weird character journey. This story is about second chances, friendship, and the idea that your dreams can come true in unexpected ways – anywhere in the world, at any point in your life.”

The first episode of Bumper In Berlin aired on Nov. 23 on Peacock. NBC will also air the premiere episode, along with a sneak peak at Episode 2, on Nov. 28 following The Voice.