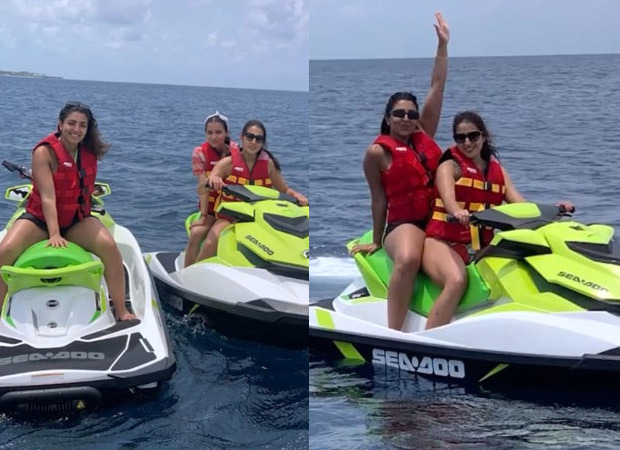 Sara Ali Khan is having the time of her life in the Maldives with her friends. The actress took a holiday to the island nation to celebrate one of her friends’ birthday. She’s been posting photographs and videos from her vacation that makes you envious. She released a new video today, September 10, in which she is seen jet-skiing with her buddies. In addition to the film, the actress also shared a hilarious poem that she had written.

She captioned the video with a poem penned by herself, which reads, “Hum nikle on our jet Ski. Khaara samundar yes, the salty sea. Adventure time for hum three. Hair flying, choppy waves but feeling so free. Laughing, screaming, singing I feel is the key. To living and loving and allowing yourself to be. And of course my girls make it easier to another degree. With them it’s mauj-masti-maza 100% guarantee

Sara Ali Khan had previously used Instagram to wish her best friend, Sara Vaisoha, a happy birthday. She uploaded four images of the two of them from the Maldives. In the images, the best buddies are seen posing with a bicycle.

Sara wrote, “Happiest Birthday my pretty best friend Thank you for being my Sara and my Sahara #twinning #soulsisters #live #laugh #love.

On the work front Sara Ali Khan will next be featured in Atrangi Re, a cross-cultural love storey directed by Aanand L Rai. Akshay Kumar and Dhanush play lead roles in the film.