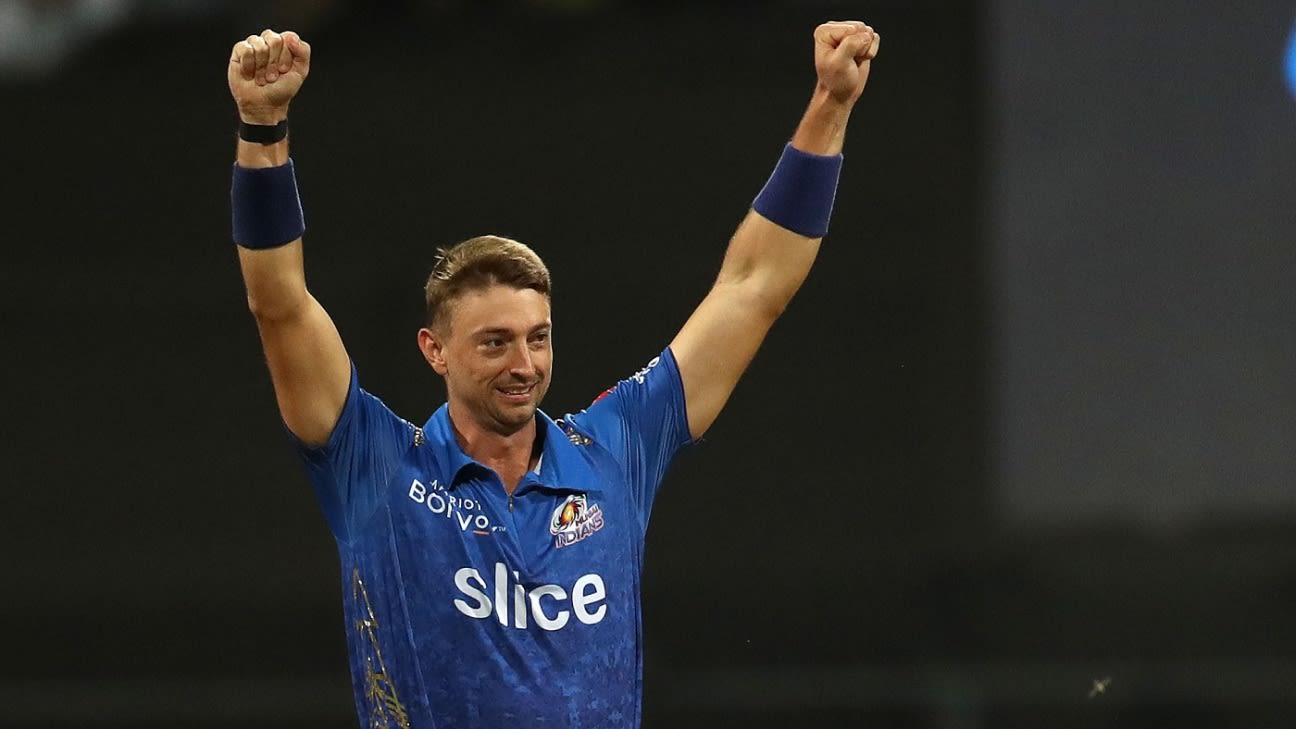 The greatest rivalry in IPL history lived down to its improbable basement-battle status, as Chennai Super Kings gave Mumbai Indians an outside chance of leapfrogging them at the bottom of this year’s standings with a scrappy five-wicket defeat at the Wankhede Stadium.

Not for the first time, Super Kings were discombobulated by the early swing that Mumbai seamers were able to extract, as they slumped to 97 all out with four overs left used. It was their second-lowest total in IPL history, behind the 79 they made on this ground in 2013, while they also lost five wickets in the powerplay for the second time – again, Mumbai were responsible for the previous occasion, at Sharjah in 2020.

At least Super Kings’ own quicks resolved to go down fighting, as Mukesh Choudhary and Simarjeet Singh combined to grab four wickets inside five overs – and very briefly it seemed that MS Dhoni‘s partial rally of 36 not out from 33 balls (three times as many as any of his team-mates) might have just given his team a fighting chance. However, Tilak Varma and Hrithik Shokeen – who between them barely add up to Dhoni’s 40 years – broke the chase with a responsible grind of 48 in 7.5 overs, before Tim David’s typically forceful finish.
Power outage? Powerplay outage
Farcical scenes greeted the opening exchanges of the contest, as a local power outage meant that no DRS was available for the start of Super Kings’ innings. What came next was thoroughly inevitable. Daniel Sams‘ first delivery to Devon Conway nipped back off the seam to thump him on the pad, and umpire C Ravikanthreddy’s response was mercilessly instantaneous. Conway was nonplussed, to put it mildly – the ball might, at a pinch, have been clipping the outer extremity of his leg stump. But the die was cast, and die Super Kings did.

Moeen Ali, never the most comfortable starter against the quicks, emerged at No. 3 and didn’t hang about. A second-ball bouncer stopped in the pitch as Moeen swung too eagerly across the line and scuffed an ugly hoick to short midwicket, and at 2 for 2 after four legitimate balls, the omens weren’t too promising, even before Jasprit Bumrah had started walking to the top of his mark.

Against Kolkata Knight Riders on Monday, Bumrah had sauntered off with the small matter of 5 for 10 in four overs. Now he made it 6 for 10 in 4.4, as Robin Uthappa was beaten hollow in an undignified stay – three times outside the off stump, and finally pinned plumb in front of that same stump for 1, as he flitted across the line to leave Super Kings utterly beached at 5 for 3. Before the next ball had been bowled, the DRS issue had been resolved – though fortunately for Uthappa, not in time for him to waste a lifeline.

Aussies rule in the middle overs
Sams will bowl better balls than the leg-side long-hop that snaffled his third wicket in the space of 13 balls – Ruturaj Gaikwad had just driven Bumrah for four through the covers in his previous, a rare feat this week, but his follow-up was to feather a slender edge to Ishan Kishan for 7.

Riley Meredith‘s arrival for the final over of the powerplay, however, produced a rather more classical fast bowler’s breakthrough, as Ambati Rayudu was sawn in half by a nip-backer from back of a length, for Kishan to gobble the inside edge.

With Shivam Dube emerging at 29 for 5, there might have been a temptation to turn back to Bumrah for his third over out of seven, but Meredith was perfectly capable of giving the new man the hurry-up. An attempted ramp off the short ball ended up as a muffed top edge, and at 39 for 6, Kishan had suddenly three catches in the space of four overs.

Dhoni has licence to go deep
Dhoni is never a man to let a match situation tilt his equilibrium. Presumably, all he saw as Dwayne Bravo emerged (for a seventh-wicket stand that would exactly double the total without remotely rescuing the cause) was the chance to bed in and drag the innings as deep as was feasible.

An early flurry hinted at what he might yet be capable of, as Kumar Kartikeya was flayed for consecutive fours to bring up the team’s 50, before Dhoni smoked his next ball, from Shokeen, over square leg for six. But Bravo never quite settled in the same circumstances. He had been living dangerously for 13 balls before clouting Kartikeya over long-on for six, but one ball later, he took on an ambitious drive, and drilled a head-high chance to short cover.

Three balls later, Simarjeet became Kartikeya’s second wicket of the over, and when Maheesh Theekshana responded to a sharp bouncer from Ramandeep Singh with the meekest of prods to cover, time and wickets were running out for Dhoni. He bided his time as Sams completed a superb day’s work with 3 for 16, then tried to take on Meredith’s extra pace with a four and a six in the 16th over. But Kishan, alert to the likelihood of a final-ball bye, clawed down the bouncer and unleashed his shy with glove still attached. It was unerring, and Choudhary was caught yards short.

Choudhary, Simarjeet go down guns blazing
With so few runs to play with, there was no scope for subtlety in Super Kings’ response. For just the fourth time in IPL history, both new-ball bowlers – Choudhary and Simarjeet in this case – rattled straight through all four of their overs, and instigated something approaching panic in Mumbai’s ranks too – reducing the chase to 33 for 4 in the first five overs.

Choudhary, in particular, bowled a beautifully sharp line, swinging the ball late to prise out Kishan in his first over before seizing the moment in his third – as first Sams, then the South African debutant Tristan Stubbs, both paid the price for their safety-first reticence. Each was served up a full toss the ball before they fell but neither could capitalise and they were both nailed lbw for a total of 1 from eight balls.
Only Rohit Sharma – inevitably – had the measure of the conditions, as he set himself to counterattack against the attacking length and took some sizeable lumps out of the target with four fours in his 18. Simarjeet found the nick in his second over, as a total of nine wickets fell across the two powerplays – the joint-most in IPL history – but by the end of the new-ball spells, Varma and Shokeen had ridden out the threat, to ease Mumbai towards their third win in the last four outings. Ordinarily, you’d say that was a classic example of peaking at the right time. For once, it hasn’t been quite that straightforward.