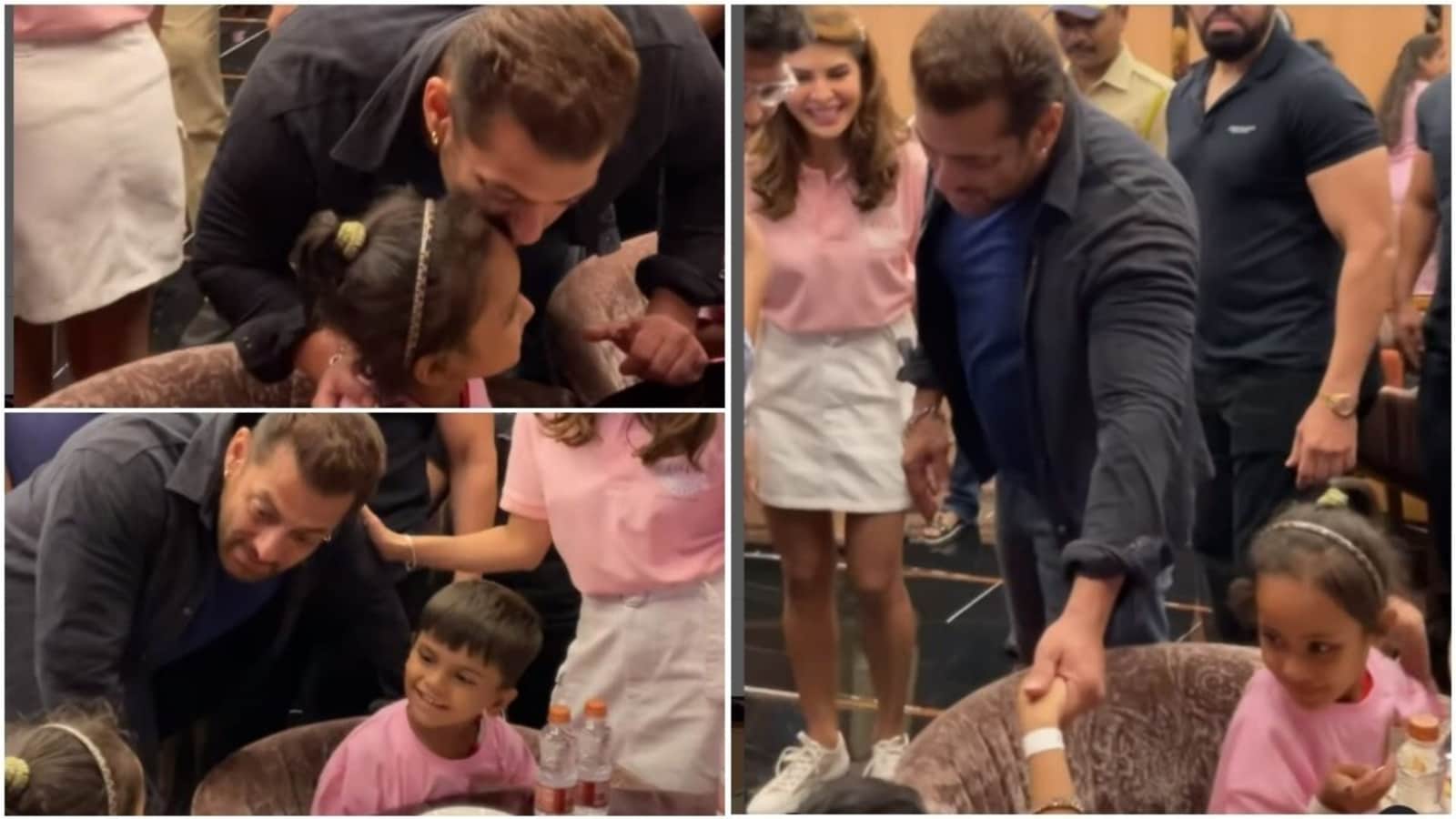 Salman Khan recently bonded with kids at an event for Jacqueline Fernandez’s charitable foundation, and his fans can’t get enough of the interaction. Salman was attending the one-year celebration of Jacqueline’s foundation You Only Live Once YOLO. He also took to the stage to address the guests at the party. Also Read| Salman Khan bonds with Jay Bhanushali-Mahhi Vij’s daughter at Baba Siddique’s bash, fans say he ‘will be a good father’

The foundation shared a video montage of Salman’s appearance at the event on their Instagram account, with the caption, “Love and kindness are never wasted. They always make a difference.” In the clip, Jacqueline Fernandez was seen showing Salman around and introducing him to the children.

The actor had a brief conversation with the kids as they ate their meals, and appeared to be very interested in what they were saying. Salman also kissed a little girl on her forehead as he prepared to leave. He waved them goodbye, before stopping for a second to extend his hands towards another child for a handshake.

Fans were in awe of Salman’s interaction with the young children, and several of them commented, “This is so cute!!!” Some others wrote for Salman, “Man with a Golden Heart.” Others wrote “Bhaijaan” adding heart emojis. A fan commented, “He always loved children,” while another wrote, “The kindest.” Meanwhile, several fans were happy to see Salman with Jacqueline, with whom he had worked in the 2014 film Kick. One wrote, “They look so perfect together.”

Many extended best wishes to Jacqueline for her foundation, with one writing, “I pray that your foundation will get more and more success.” Tiger Shroff had also attended the event, marking one-year of the foundation, during which he danced with Jacqueline on Beat Pe Booty, song from their 2016 film A Flying Jatt, as well as on Chittiyaan Kalaiyaan, Jacqueline’s song from her 2015 film Roy.

Jacqueline had launched the foundation at the beginning of May last year, sharing that she has tied up with several NGOs that cater to the different needs in society. Sharing the news on Instagram, she had written, “We have this one life, let’s do whatever we can to make a difference in this world!! I am proud to announce the launch of the YOLO Foundation; an initiative to Create and Share Stories of Kindness.”

Jacqueline was recently seen in Bachchhan Paandey alongside Akshay Kumar, Kriti Sanon, and Arshad Warsi, and in Attack alongside John Abraham and Rakul Preet Singh. She will be next seen in Ram Setu, which also stars Akshay Kumar and Nushrratt Bharuccha.

Meanwhile, Salman will soon begin filming for Kabhi Eid Kabhi Diwali. He will also be seen in Tiger 3 alongside Katrina Kaif and Emraan Hashmi. The film is scheduled for a release next year.