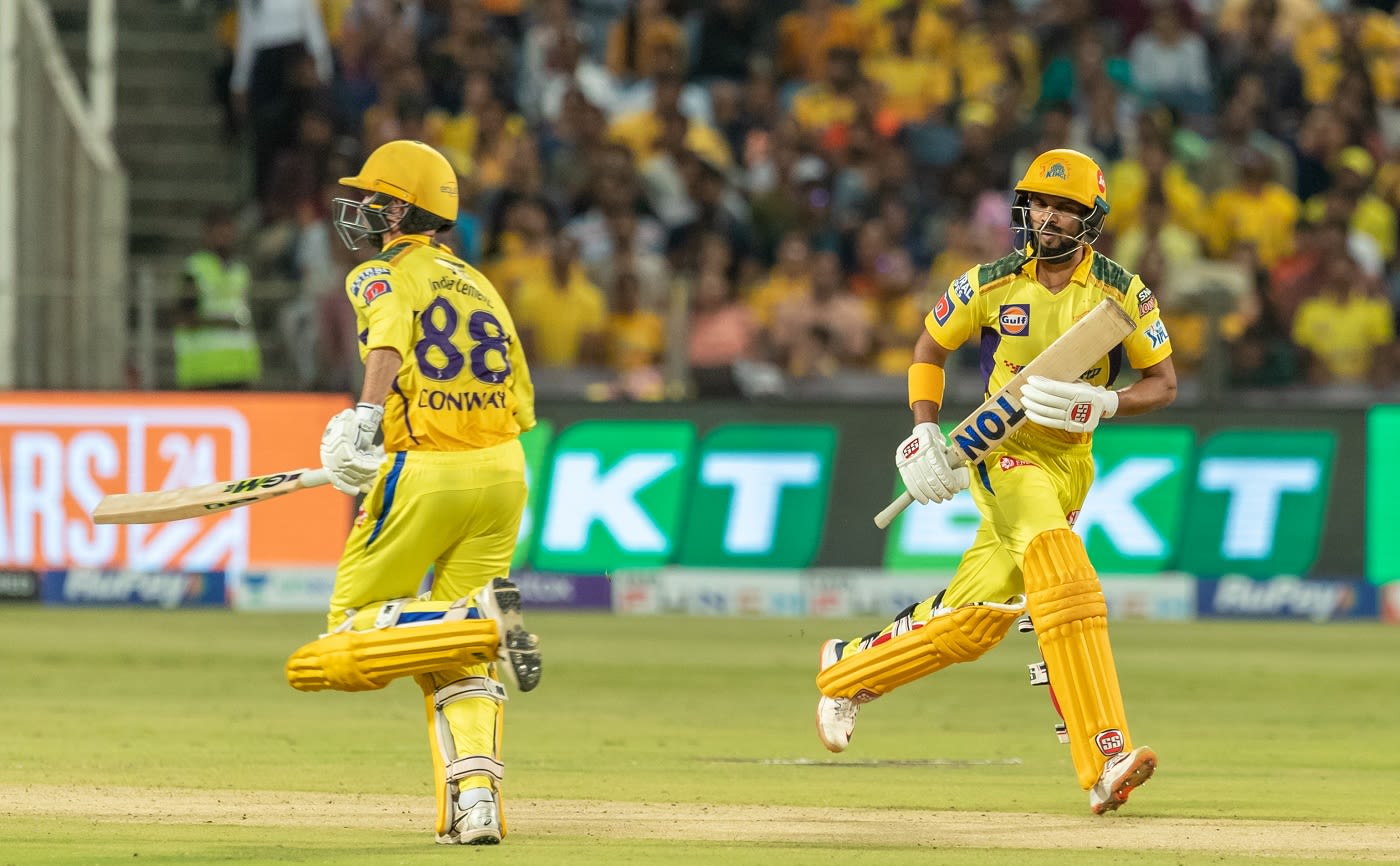 He has had a largely ordinary season so far, but against Sunrisers Hyderabad, Ruturaj Gaikwad displayed stroke-play that has had many excited about him to help set up a win for Chennai Super Kings in MS Dhoni’s first match back as captain. This was Super Kings’ third win in nine matches this IPL.
It was mostly a vintage Super Kings innings: a slow and steady start, consistent acceleration through the middle overs, batters who get in going on to play big innings. Gaikwad fell one short of a hundred, opening partner Devon Conway scored an unbeaten 85 off 55, and the two added 182, the highest stand this IPL. The defence of 202 wasn’t an easy one with the absence of the injured Dwayne Bravo adding to their bowling woes but Maheesh Theekshana and Ravindra Jadeja went for just a run a ball in the seven overs between them to help create wickets at the other end. And, Mukesh Choudhary starred with four wickets for the defending champions.

Sunrisers eventually fell short by 13, which left them with 10 points from nine games, joint-fourth with Royal Challengers Bangalore but with a game in hand.

The 40 for 0 at the end of the powerplay was a typical Super Kings score. They like their top-order batters to take their time early and then strike later. However, in doing even that, Conway was particularly slower, so Gaikwad had to be more assertive. Having seen the Marco Jansen meltdown at the death in their last match, Kane Williamson bowled three of his overs inside the powerplay, just for 19 runs.

It might be the same split webbing as Washington Sundar injured himself while trying to save a boundary. He hadn’t even started bowling at that time, which left Kane Williamson a tough call to fit in the fifth bowler.

So the replacement for Washington was Aiden Markram with his part-time offspin. They let him bowl the first over, but from the eighth over onwards, Gaikwad began the onslaught. First up was Umran Malik, whose pace and hard lengths in the middle overs have given Sunrisers an edge in this IPL. Gaikwad, though, loves pace when he is in. At 28 off 23 at the start of the eighth over, he was properly in.

Gaikwad went over cover first and then over long-on to take 13 off the eighth over. Conway dished out the same treatment to Markram in his second, finally going past a run a ball.

The quickest ball of the tournament, bowled at 154kmph by Malik, came back just as fast off Gaikwad’s bat and went between the stumps and the non-striker. A bounce took the top edge for a four. Markram’s third went for two sixes off Gaikwad’s bat, but there wasn’t much Williamson could do about that. The crowning glory was the off-drive off Malik for a six over long-off. Super Kings 117 for 0 in 12.

Bhuvneshwar Kumar pulled things back a little with a boundary-less 13th over, Shashank Singh followed it up without incident to fulfil the fifth bowler’s quota, and Williamson went back to Jansen for the 15th. The idea, perhaps, was to not protect him from the death overs, but he didn’t bowl a great over. If his last over in the previous match cost Sunrisers 25, this one went for 20 and also brought up Conway’s fifty in the process.

A Gaikwad slowdown ensued in his 90s, and he fell for 99, trying to place a short and wide ball as opposed to hitting it hard. Bhuvneshwar Kumar – 4-0-22-0 – and Malik, who conceded just eight in the 19th, pulled things back, resulting in just 49 runs in the last five, but 202 was always going to be challenging for Sunrisers.

Sunrisers had no choice but to come out with aggressive intent. It came off for the first few overs when Williamson got a free hit that he hit for a six, Abhishek Sharma got three boundaries off edges, was dropped once, and 46 came in the first three overs.

Mukesh Choudhary, who had dropped a sitter, his third drop this IPL out of five catches that have gone to him, came back with the ball to have Abhishek caught at long-on and Rahul Tripathi ramping a short ball straight to short third man. That turned the powerplay Super Kings’ way even though 58 came off it.

Williamson now went into the anchoring mode, hoping the batters at the other end would take them closer before he hit out again. Theekshana’s unpredictability and Ravindra Jadeja’s accuracy, though, slowed them down. When Markram tried to hit out against Mitchell Santner, his two sixes were followed up by a short ball pulled straight to deep midwicket.

It was now down to Williamson and Nicholas Pooran to play blinders, but this was not the day for blinders. They had left themselves too much to do – 101 in the last eight – and despite a switch hit for a six and the odd boundary, they needed 78 from the last six, which is still manageable. Dwaine Pretorius, though, benefited from all the pressure as Williamson went to ramp a ball, but was trapped right in front. Choudhary then signed off with the wickets of Shashank Singh and Washington, leaving them 50 to get off the last two.

Pooran fought, scoring a 29-ball fifty, but he had too much to do. Fifty from the last two was always going to be tough, never mind Pooran’s explosive batting. That turned out to be the case.