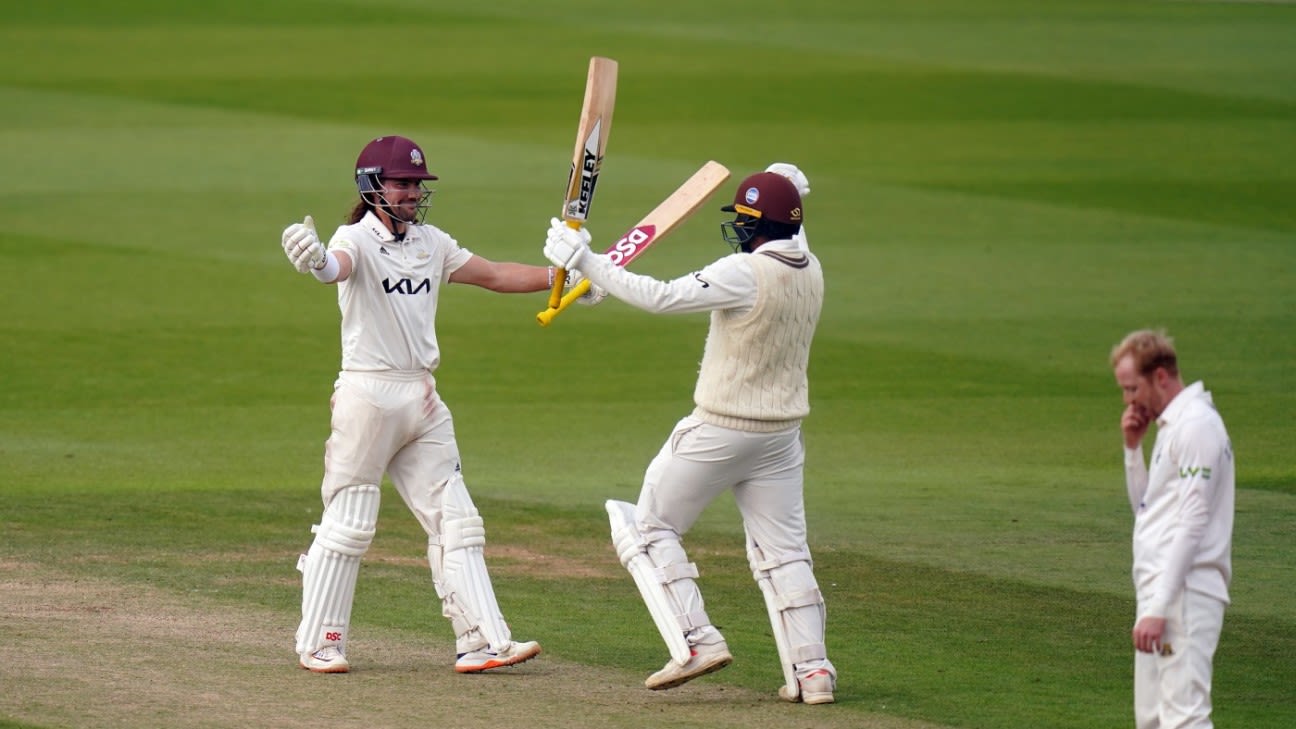 Surrey County Cricket Club, County Champions once more. A second title in four years, a fourth in the 2000s, a 21st in their long and storied history, was claimed in emphatic fashion with victory over Yorkshire by ten wickets.

This eighth victory out of 13 in the 2022 season was in parts a microcosm of their overall campaign: everyone pulling their weight with runs and wickets shared around, and the odd sizeable contribution from the likes of Ollie Pope with 136, and Tom Lawes and Dan Worrall, who led the way with four wickets in the first and second innings respectively.
Victory by an innings looked on the cards when Yorkshire resumed day three on 89 for two in their follow-on innings, but the wait for victory, confirmed at 2.35pm, only served to underline the professional nature of an outfit who, in a schedule like no other, have called on 22 players this season without looking poorer for it. For a head coach in his maiden season, Gareth Batty deserves immense credit for ensuring all were able to fit in and excel without losing their sense of selves.

Winning titles at home is always preferable, though doing so a round early – with a day to spare – meant the Division One trophy was still locked away at Lord’s. It will be back in their possession at the end of their final fixture against Lancashire up at Emirates Old Trafford, and will presented by their former chair Richard Thompson, no less, in his new role as chief executive of the ECB.

That game may no longer have any consequence, but don’t call it a dead rubber. Surrey still have an unbeaten record to preserve.

Yet, as odd as it may sound, no one seemed to miss the golden goblet here.

This last home game of the summer was already a week of celebration. The ground was renamed The Micky Stewart Oval to honour the legend following his 90th birthday, and he was awarded the keys to the ground at tea on day two. During the innings break, before the winning runs were sought, news of Hampshire’s 77-run defeat to Kent filtered through to draw more through the gates, some of whom only arrived after Burns, fittingly, had smashed the final runs through midwicket to end the chase in 16 minutes and leave him with a rather spectacular 30 not out off 16. Why the rush, Rory? “I was getting thirsty,” he joked.

By 2.49pm, Surrey players and coaching staff had re-emerged onto the ground, beers in hand, to salute the crowd. There’s a small matter of the team’s end-of-season dinner tonight, too. Trophy or not, they’ll be just fine.

This was always going to be more Surrey’s day than Yorkshire’s as the latter returned in their second innings on 89 for two, still trailing by 65. Quite how emphatically so was dependent on the goings-on at The Ageas Bowl, where second-place Hampshire, already four-down in their chase, had 269 remaining to secure an unlikely win over Kent. Nevertheless, the best of starts came here when a clerical bowling change brought the first of the final eight wickets needed.

Cameron Steel opened proceedings from the Vauxhall End in order to switch Worrall to the Pavilion End after the seamer had bowled the final over of day two. Steel’s final delivery – a googly – snuck through Tom Kohler-Cadmore’s gate, just as it did for Ben Mike’s in the first innings. The only difference was the lack of bounce which drastically reduced Kohler-Cadmore’s chances of keeping it out.
With that we returned to the usual opening duo of Kemar Roach and Worrall, and the former should have had Adam Lyth for 37 only for Ryan Patel to fail to scoop up a low chance diving to his right from third slip. Roach channeled his anger to maintain a probing line to the left-hander and, 36 deliveries later, removed him with arguably the best ball of the morning: forcing the left-hander to play in front of middle-and-leg, then nipping the ball off the seam to give Patel a far simpler chance with which to make amends.

It was the second breakthrough in three balls, after Clark finished the over before by removing Will Fraine with a bit of extra lift that surprised the right-hander into playing onto his own stumps. With that, Clark’s season tally moved to 30 which, along with his 467 runs at 51.88, underlines how invaluable he has been to the balance of this XI since his arrival from Lancashire in 2018. Fittingly, he was awarded his county cap at the lunch interval.

Clark might have ticked over to 31 by then. With Yorkshire trailing by 30, skipper Jonny Tattersall, top-scorer in the first innings with an unbeaten 45, was put down on three off Clark. Again, Patel was the slip fielder though the legitimacy of the catch would have probably been called into question given how low it arrived.

Tattersall went on to a dogged 21 but had the misfortune of being caught down the leg side off a delivery from Jamie Overton that looked like being too wide for any trouble. He’d at least got his team within four runs of Surrey’s total, a deficit which was wiped with singles before Jordan Thompson square-drove Overton gloriously through backward point to put Yorkshire four ahead.

That lead was 17 (for six) by the end of the first session, at which point the more cynical sorts began fearing a tricky fourth-innings chase, even as an eighth-wicket stand of 63 between James Vince and James Fuller began to chip away at the 169 still needed for victory further down south.

Two overs after the restart, Thompson had a bruise and a new helmet after Overton cranked one up from the Pavilion End to strike him on the grille via his right forearm. And, to add insult to injury, he was off four deliveries later when one from Worrall kept low to pin him on the shin in front of off stump. At the same time, Vince holed out to deep midwicket for 73. With that, those in the stands could refocus their attention on what was in front of them.

A brisk 22 from five overs was nipped in the bud when Dom Bess was caught down the leg side off Roach for a diligent 43, before Mike’s brisk 14 was ended by a nip-backer from Worrall with the lead at 52. And when Worrall bowled the ever-retreating Ben Coad to give himself four for 61, Surrey’s task was simple – 55 for the win. And then, when Kent took the last Hampshire wicket to confirm a 77-run win during the innings break, confirmation this 55 would be for the Championship.

The first over brought 16 of them: Burns guiding two fours to third man between second and third slip, before an imperious clip off the hips through square leg. A botched charge led to four byes in between whiles and, in turn, a carnival atmosphere ensued in south London.

Among the cheers for boundaries was the odd chuckle, notably when Tattersall, having given up keeping duties to Kohler-Cadmore, started with a head-high full toss that Patel trimmed for four of his own (six with the no-ball). A heartier whoop followed when Burns pulled out a perfect reverse sweep for boundary No.5, before the sixth confirmed the inevitable.