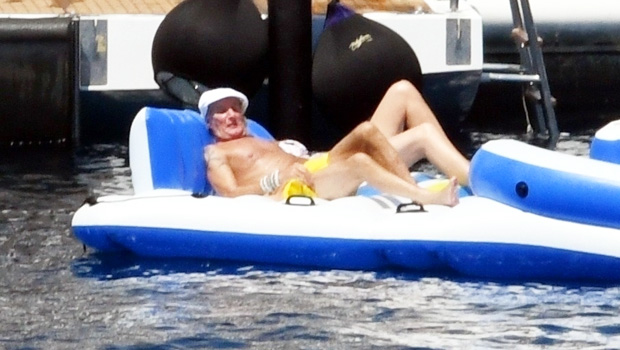 Rod Stewart looks like he’s having a blast during his summer vacation with his wife Penny Lancaster and their kids. The 77-year-old rocker was spotted catching some sunrays, as he relaxed shirtless on a floatie in Elba, Italy on Thursday, August 4. The iconic singer looked like he was having a great time getting some much-deserved relaxation!

As the “Da Ya Think I’m Sexy?” singer kicked back, he sported a bright yellow pair of swim trunks and a white cap, plus a few bracelets on his arm. He seemed to be having a great time, as he relaxed on the water behind his yacht. His wife Penny was also seen catching some sun on the back deck of the boat in a white one-piece bathing suit, as her hubby got on deck.

It seemed like both Penny and Rod have been enjoying their stay in Italy. The pair have been traveling with almost all of the rockstar’s kids. Penny shared a photo of the two of them with seven of his eight children. Besides the two that Penny and Rod share (Alastair, 16, and Aiden, 11), the couple smiled alongside Sean, 41, Kimberly, 42, Ruby, 35, Renee 30, and Liam, 27. The only one missing was Rod’s eldest daughter Sarah, 53. “Stewart Clan comes together,” Penny wrote under the family photo.

Rod Stewart: Pics Of The British Rock Singer & His Family

Aside from the extended family reunion, Penny also enjoy got some bonding time in with her stepdaughters Kimberly, Ruby and Renee. The TV personality shared a photo of herself with the three girls from Rod’s previous relationships. The “Rhythm of My Heart” singer also posed with his girls and appeared on some of their Instagram Stories as well.

Rod and Penny have been married since 2007. The model is his third wife. He was previously wed to Alana Collins from 1979 to 1984, and then Rachel Hunter from 1990 to 2006. He’s also had kids with his exes Susannah Boffey and Kelly Emberg.

Rod Stewart’s Wife: 5 Things To Know About Penny Lancaster, Plus His Previous Marriages