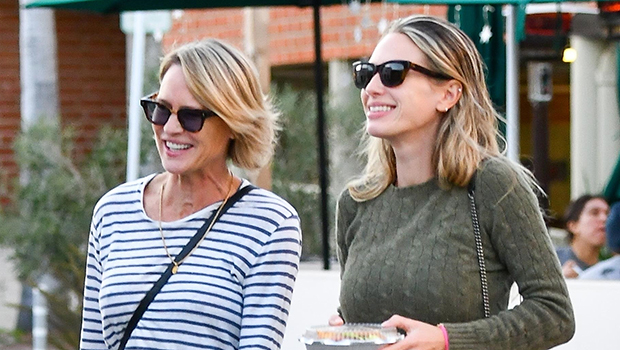 Robin sported a black and white striped sweater, as well as a pair of jeans and black sneakers. She had a bag slung across her shoulder and matched her daughter with a pair of dark sunglasses. The Elvis and Nixon actress looked comfy in a pair of black leggings, a green knit scarf, and a pair of flip flops. She carried a takeout container with her as she was out with her mom.

Robin had Dylan in August 1991, with her then-boyfriend Sean Penn, 62. The two actors got married in 1996, but they split up in 2010. After the divorce, Robin married Saint Laurent exec Clement Giraudet in 2018, while Sean wed actress Leila George in 2020, but in 2022, Robin separated from her husband and Sean got a divorce. The Forest Gump star filed for divorce in September, while the I Am Sam actor filed in October 2021.

After their breakups with their most recent partners, Sean and Robin have been spotted spending some time together. The former couple was seen traveling together at LAX airport earlier in January. They were seen meeting up in Los Angeles again a few days later. While it’s been 13 years since their marriage ended, it’s clear that they’re still very close to one another.

Aside from the recent reunions with Dylan’s dad, it’s clear that Robin and her daughter have a very special bond. The two women are often seen spending time with one another, and they’re definitely super close to each other. The mom-and-daughter duo looked like they had a blast when they attended a Ralph Lauren fashion show together in October.

Sean Penn’s Past Marriages: Everything To Know About His 3 Past Wives, Including Madonna