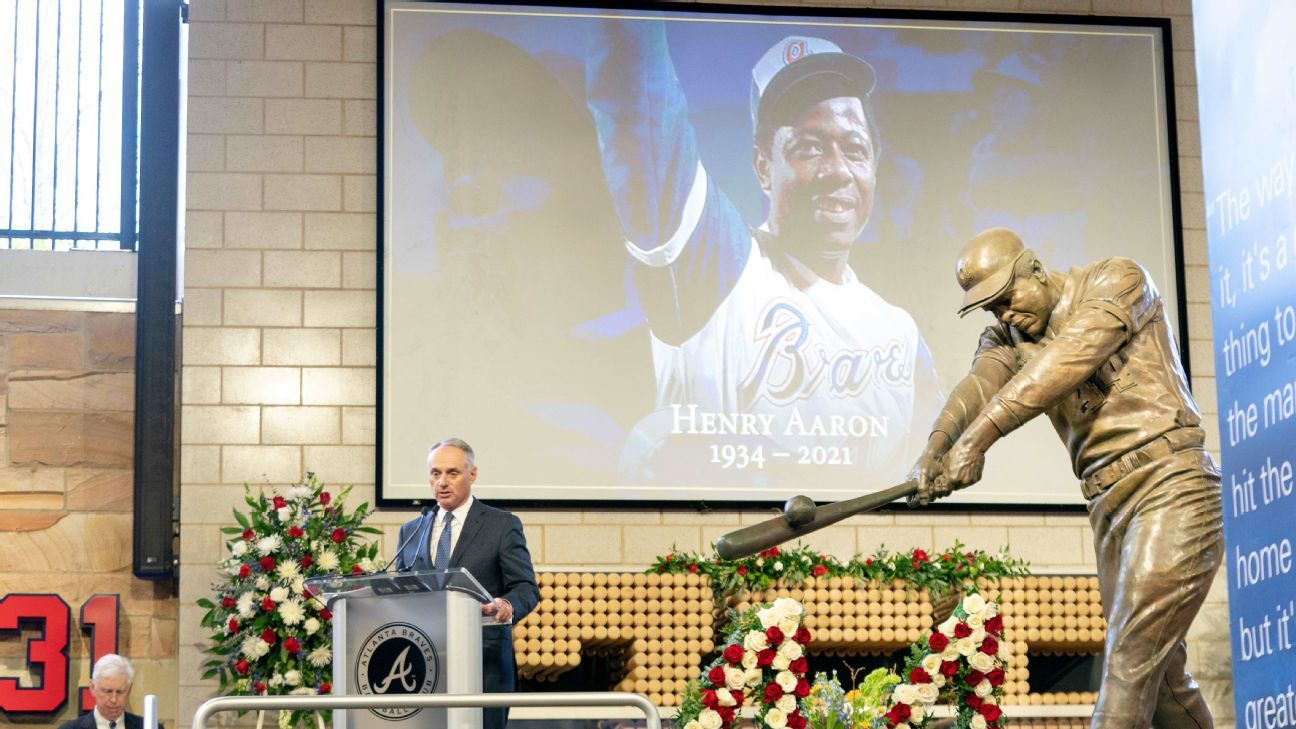 ATLANTA — Brian Snitker choked back tears as he remembered Hank Aaron’s affection for those who didn’t possess his unparalleled talent on the baseball field.

During his post-playing career running the Atlanta Braves‘ farm system, the Hammer had a penchant for looking beyond the can’t-miss prospects.

“He always wanted to move a player up, and he preferred that it wasn’t the so-called bonus babies,” said Snitker, who has managed the Braves since 2016 and got his start in the dugout thanks to Aaron. “He wanted to get that grinder guy, the guy who was overachieving.”

Snitker was among those who spoke Tuesday at a memorial service honoring Aaron, who died last week from natural causes at the age of 86.

Baseball commissioner Rob Manfred, Hall of Famer Chipper Jones and former Braves outfielder Marquis Grissom were among those who spoke at the ceremony, which was held before a small, socially distanced crowd — including Aaron’s widow, Billye, and other family members — on the concourse directly behind home plate at Truist Park.

The remarks were delivered in an exhibit known as Monument Garden, which prominently features a statue of Aaron delivering the swing that produced 755 homers.

Aaron’s famed No. 44 was painted in the dormant grass of center field. Braves chairman Terry McGuirk noted the unseasonably warm January weather — the temperature climbed into the upper 60s — as a sign from above honoring one of the game’s greatest icons.

Noting the 10 Baseball Hall of Famers who have died in the past year, Manfred said Aaron “belongs on our sport’s Mount Rushmore. He stood — on and off the field — above all others.”

Most of the remembrances focused on Aaron’s humbleness and the impact he made after retiring as a player in 1976. Few spoke about him being the one who famously eclipsed Babe Ruth’s home run record, or the unprecedented, two-decade run of sustained excellence that helped him establish several other marks that still stand today.

Snitker remembered being a nondescript minor leaguer who got a shot at another calling when Aaron offered him his first managing job in 1982 with the Anderson Braves, a team in the Class A Sally League.

“The reason I’m here today is because of Hank Aaron,” Snitker said, pausing to maintain his composure.

Snitker toiled in minor league obscurity through most of his coaching and managing career before finally getting the call to become Braves skipper at age 60. Since then, he has guided the team to three straight NL East titles, earning NL Manager of the Year honors in 2018.

“I’ll miss the times he used to stop by, come by my office and we could just sit and talk,” Snitker said. “I’ll miss the friend and the mentor that I had in my life.”

Jones recalled how Aaron pushed the Braves to select him with the No. 1 pick in the 1990 amateur draft, when many considered pitcher Todd Van Poppel to be the leading prospect.

“Hank was very instrumental in me becoming an Atlanta Brave,” Jones said. “The room of Braves decision-makers was split on who they were going to take with their first pick. As legendary scout Paul Snyder once told me, the vote came around to Hank. He paused, looked at everybody in the room, and he said, ‘Y’all better draft that Jones boy.’ I’ll never forget that. That comment must’ve carried some weight.”

Van Poppel didn’t do much in the big leagues, finishing with a 40-52 record. Jones spent his entire career with the Braves and was inducted into Cooperstown in 2018.

“His swing, his smile, his spirit. They were all beautiful.”

Jones said he once asked Aaron — who played in an era with dominating pitchers such as Sandy Koufax, Bob Gibson and Juan Marichal — whether he was ever intimidated at the plate.

“He said, ‘Chipper, I fear no man when I have a bat in my hand,'” Jones said, breaking into a smile.

According to the former Braves third baseman, Aaron could be summed up in one word.

“His swing, his smile, his spirit,” Jones said. “They were all beautiful.”

A private funeral for Aaron will be held Wednesday. He will be buried at historic South-View Cemetery, the city’s oldest Black cemetery, where he will be interred alongside civil rights leaders such as John Lewis and Julian Bond.

The Braves plan to honor Aaron during the upcoming season. McGuirk announced the first of those initiatives: a $1 million donation to establish the Henry Louis Aaron Fund, which will work to increase minority participation among players, managers, coaches and front-office personnel.

That was an issue that Aaron took a keen interest in throughout his life. He often criticized the lack of Black managers and general managers in Major League Baseball. He fretted that fewer Black people were playing the game.

The Braves’ donation will be matched by $500,000 apiece from MLB and the players’ association.

Manfred pointed to a “strong desire to continue with the good work he did throughout his life, particularly with encouraging minority participation in baseball.”

Grissom said he’ll always remember the advice Aaron gave him during his college days at Florida A&M, when the team got an impromptu tour of the Hammer’s Atlanta home on the way to a game in North Carolina.

“‘If you get an opportunity, do your very best,'” Grissom recalled Aaron saying. “Those words stuck with me. They lit a fire in me that is still lit today.”

When Ranveer Singh and Ranbir Kapoor set the stage on fire...

The Louvre Turns to Merch