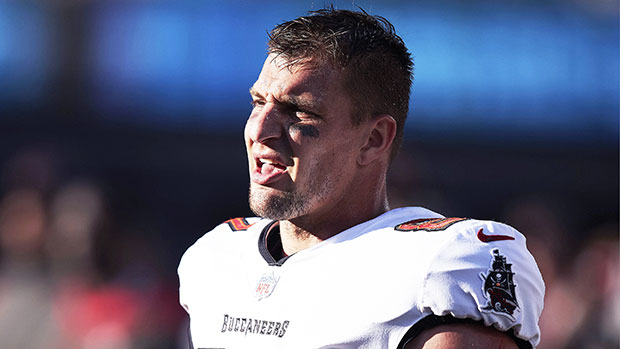 Rob Gronkowski is retiring from the NFL for a second time. The 33-year-old tight end shared the news via social media on June 21. Gronk reflected on how it was his lifelong dream to play professional football for the Tampa Bay Buccaneers. And, as he pointed out, Gronk did just that for the past two NFL seasons after coming out of retirement in April 2020 following a long career with the New England Patriots.

“I want to thank the whole entire first class Buccaneers organization for an amazing ride, trusting me to come back to play and help build a championship team,” Gronk said in his post. “I will now be going back into my retirement home, walking away from football again with my head held high knowing I gave it everything I had, good or bad, every time I stepped out on the field.”

The pro athlete continued, “The friendships and relationships I have made will last forever, and I appreciate every single one of my teammates and coaches for giving everything they had as well. From retirement, back to football and winning another championship and now back to chilling out, thank you to all. Buccaneers 🏴‍☠️ fans, the Krewe, without you guys, none of this is possible, all of ya brought it every game, thank you for all you do. Cheers to what’s next, maybe sailing the seas 🏴‍☠️ Arghhhhhh!!”

Gronk’s longtime teammate Tom Brady, 44, reacted to the big news in a comment on the post. “Love you as a man, teammate and friend. One of a kind in every way❤️,” Tom said. The pair played together on the Patriots and on the Buccaneers. Tom announced his retirement in February 2022, only to reverse that decision the following month. The famous quarterback will be back with Tampa Bay for the next season, but sadly Gronk won’t be playing by his side.

Gronk played with the Patriots for nine seasons and won three Super Bowls. He went into retirement in March 2019, but returned in April 2020 to reunite with Tom to play for the Buccaneers. They won the 2021 Super Bowl with against the Kansas City Chiefs led by quarterback Patrick Mahomes.

NFL Star Brandon Marshall’s Kids: All About His 3 Children