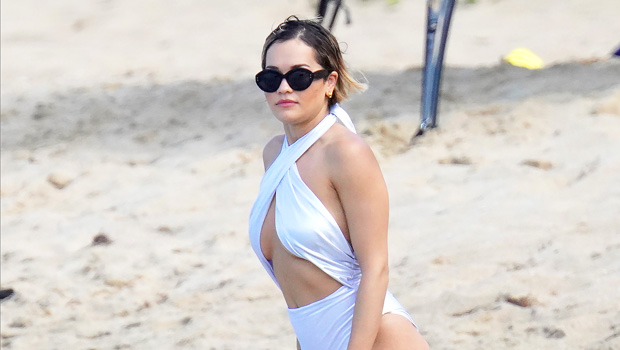 British singer Rita Ora, 31, got her sun on with Texan model and the former fiancée of Liam Payne, Maya Henry, on Tuesday. The pair were photographed tanning their toned bodies in Madrid, where Rita traveled for a performance for high-end French jeweler, Cartier. In the photos, which can be seen here, Rita stunned in a blue floral print bikini from Frankie’s, which retails for $160 for the set. The top was a classic triangle bikini while the bottoms were a tiny thong.

Meanwhile, Maya, 21, looked extravagant in a green thong bikini and appeared to be enjoying herself despite seemingly being heartbroken over her sudden split from the former One Direction member. Although Liam’s rep confirmed that the pair had been broken up for months by the time reports of their split surfaced in May, Maya made it seem like a different story when she reacted to photos of Liam cuddling up to another girl, Instagram model Aliana Mawla. In response to fans tagging her in the photos on Instagram, she wrote, “I love all of the fans so much but please stop sending me these pictures of my fiancé wrapped around another woman. This is not me and it’s hard enough knowing this has happened without seeing it. Enough now.”

In response to Maya’s since-deleted comment, a friend of Liam’s EXCLUSIVELY told HollywoodLife: “Liam told friends that he and Maya broke up a while ago, so it’s really not fair that he’s being made to look like a cheater. He’s a sensitive guy so of course this is upsetting but at the end of the day the people in his life know that truth and know his heart is good.”

Rita, on the other hand, was also accompanied by partner Taika Waititi, 46, during her sunbathing rendezvous. Rita and the Jojo Rabbit actor are reportedly engaged and planning their wedding, per the UK Sun. “This isn’t about them doing a big showy thing and crowing about it beforehand. It’s just about them being in love and deciding the time is right to formalize their relationship,” a source for the outlet revealed in early June. “They couldn’t be happier.” Neither Rita nor Taika have confirmed or denied the engagement reports.

Rita and Taika began dating in 2021 and made their red carpet debut in August of that year. Liam and Maya dated on and off beginning in 2018 and got engaged in 2020.

Celebrities With Coronavirus: See Who Has Had COVID-19