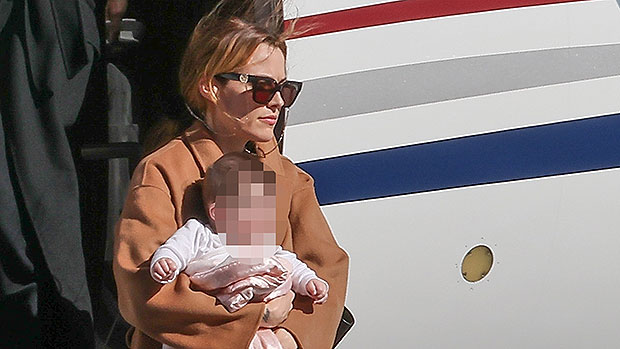 Riley Keough‘s baby has been photographed for the first time since it was revealed at her mother, Lisa Marie Presley‘s, Graceland memorial on Jan. 22 that she had her first child with her husband, Australian stuntman Ben Smith-Petersen. Riley, 33, and Ben were seen deboarding a private jet in Los Angeles on Monday, Jan. 23 with their baby girl, whose name and birthdate are unknown, safely in Riley’s arms. The first great-grandchild of rock legend Elvis Presley, who died in 1977 at the age of 42, was sweetly wrapped up in a light pink blanket and wore a white long-sleeved top for the airplane ride.

Ben, 31, revealed he and Riley welcomed a baby when he read the heartfelt eulogy his wife wrote for Lisa, who died unexpectedly at the age of 54 on Thursday, Jan. 12 after suffering cardiac arrest, at her memorial service. “Thank you for showing me that love is the only thing that matters in this life. I hope I can love my daughter the way you loved me, the way you loved my brother and my sisters,” he said, per Us Weekly. “Thank you for giving me strength, my heart, my empathy, my courage, my sense of humor, my manners, my temper, my wildness, my tenacity. I’m a product of your heart.”

Riley and Ben met each other in 2012 while shooting Mad Max: Fury Road and began dating when they went back to reshoot some scenes in Australia, the actress told USA TODAY in 2016. “Two weeks into dating him, we were at a gas station and I was like, ‘I could see myself having kids with this person,’” she recalled to the outlet. “It was kind of like I knew I was meeting my husband. It was very cool.”

The sweet couple got engaged in 2014 and walked down the aisle in an intimate Napa Valley, Calif. wedding. They celebrated their seventh anniversary in Feb. 2022. “7 years of RAD luck. I love you to the moon & back. 7,000 more years please,” Ben wrote alongside a photo from their wedding day to honor his bride.

A few months later, in May, Riley revealed that she and Ben actually got married in a Hindu ceremony in Nepal, where they were building a school. “The families knew we were getting married and they said, ‘Let us throw you a Hindu wedding,’” she recalled in an essay for Vogue Australia. “It was so beautiful and, in some ways, that wedding was a little more intimate and really special. That wedding, I cried. At my bigger wedding I was a little nervous, I wasn’t as present. But it was still equally as amazing.”

As mentioned above, Riley’s child is the first great grandchild of Elvis and Priscilla Presley. Elvis and Priscilla, 77, have four grandchildren. Lisa Marie had Riley and her brother, Benjamin Keough (who died in 2020 at the age of 27), with her first husband, Danny Keough. Lisa also had twin daughters, Harper and Finley, with Michael Lockwood. Their divorce was finalized in 2021, years after their split.

Ben Smith-Petersen: 5 Things To Know About Riley Keough’s Husband Who She Secretly Welcomed A Baby With