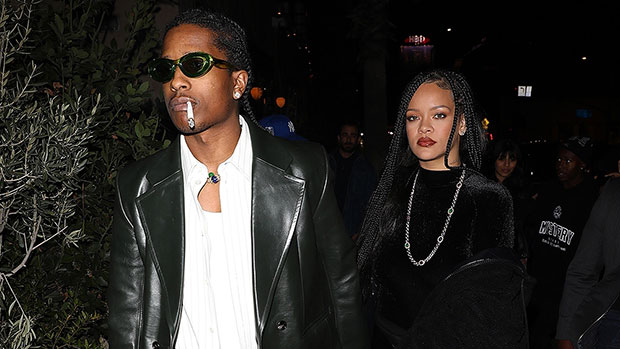 Rihanna, 34, supported her boyfriend A$AP Rocky‘s latest project when she showed up to a launch party with him at the Fleur Room. The bash celebrated the release of his new blended Canadian whisky from Mercer + Prince and they both turned heads in matching black fashionable outfits. RiRi rocked a long-sleeved black velvet dress with an opening in the bottom front under a black coat and gloves while A$AP, 34, donned a black leather blazer-style coat over a white top and jeans.

The lovebirds were photographed walking outside the launch’s location as they stepped up on a sidewalk. They held hands and didn’t pay much attention to the cameras or onlookers around them. People looked on in awe at the couple, though, and they seemed to definitely capture the most attention during the party.

One day before Rihanna and A$AP’s latest outing, they made headlines when they went on an ice cream date. They visited the European-inspired restaurant called Issima, in Los Angeles, CA, before they went to the ice cream shop and enjoyed their favorite dessert. They again wore stylish outfits for that outing as well, including a black leather jacket and pants for her and a black leather jacket and jeans for him.

When Rihanna and A$AP aren’t attending parties or dinners together, they’re at home taking care of their new son. The proud parents have been very private about the six-month-old tot and haven’t even announced his name yet, but that didn’t stop RiRi from recently gushing over him during a Savage X Fenty promo event. “[It’s] not a chapter, it’s like a new book,” she told Access Hollywood about having a baby. “When he looks at me in my eyes, my whole soul is like…I can’t tell if it’s cold or hot,” the “Umbrella” singer also said. “It’s just like dropping, it’s like amazing.”

Rihanna’s New Album: Everything We Know About Her Record, ‘Black Panther’ Song & More