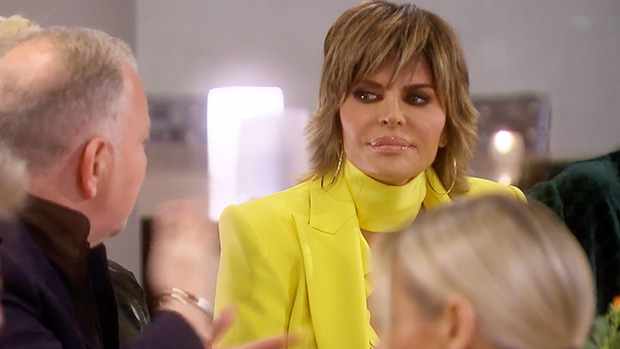 If we didn’t know any better, we might say we just watched The Real Housewives of New Jersey because the family drama was piping hot during the Sept. 21 episode of The Real Housewives of Beverly Hills. Following Kathy Hilton‘s alleged off-screen “meltdown” last week, viewers finally learned what happened after she and Lisa Rinna left a bar in Aspen together.

At the start of this week’s episode, Lisa provided a play-by-play in her private confessional, saying, “[Me and Kathy got] in the sprinter van and Kathy starts screaming about everything. And she’s saying things like, ‘I’m gonna take down NBC, Bravo. I will take down this show single-handedly. I will f—king ruin you all.’” Then, once they arrived back at Kyle Richards‘ Aspen house, things got worse, according to Lisa.

“She takes her glasses off, she throws them on the ground, she’s jumping up and down breaking her glasses. She’s pounding the walls,” Lisa said to the camera. “And she’s screaming [that] she made Kyle. Kathy’s responsible for Kyle and she said, ‘I will destroy Kyle and her family if it’s the last thing I ever do.’”

Lisa later speculated that Kathy’s outburst may be rooted in jealousy. “Kyle is way more famous and way more successful than Kathy Hilton has ever been,” she noted. “I think that it’s been hard for Kathy to have it all and then have her sister have more.”

Kathy skipped the flight home from Aspen with the other ladies, but she was forced to reunite with most of them back in Beverly Hills, when Crystal Kung Minkoff threw herself a Roaring 20’s birthday party. Kyle skipped out on the party because she had to start filming Halloween Ends in Georgia, but everyone else went and the tension between Kathy and Lisa was palpable.

Kathy actually acted like nothing had happened in Aspen when she arrived at Crystal’s party, and Lisa thought it was really “weird”.

“It is excruciatingly difficult to sit and watch Kathy pretend like nothing happened. And it’s starting to build in me, and I’m super uncomfortable,” Lisa further said in her confessional after watching Kathy interact with their co-stars at the party. “And if these women knew exactly what Kathy said about them, they wouldn’t be real happy about it — I’ll tell you that. It’s so f***ed up on every level. It’s f***ed up.”

It was so “f***ed up” that Lisa felt the need to leave the party early. She couldn’t be around Kathy any longer, knowing what she knows. “I’m still really upset after what happened in Aspen,” she told Crystal. “And I can’t sit here any longer.”

“I am really trying. But I feel I have seen the devil, and her name is Kathy Hilton,” Lisa further said in her confessional.

Other than Lisa, Kyle, and Erika Jayne, no one really knows what happened yet. They only think Kathy got upset at the bar after everyone refused to the conga line with her. Erika only knows because Lisa told her the details via text messages the night of the incident, so when everyone started leaving Crystal’s party, Erika started sharing some of the information with Dorit Kemsley, who said Kyle is the one who will suffer the most from all of this. And she’s probably right.