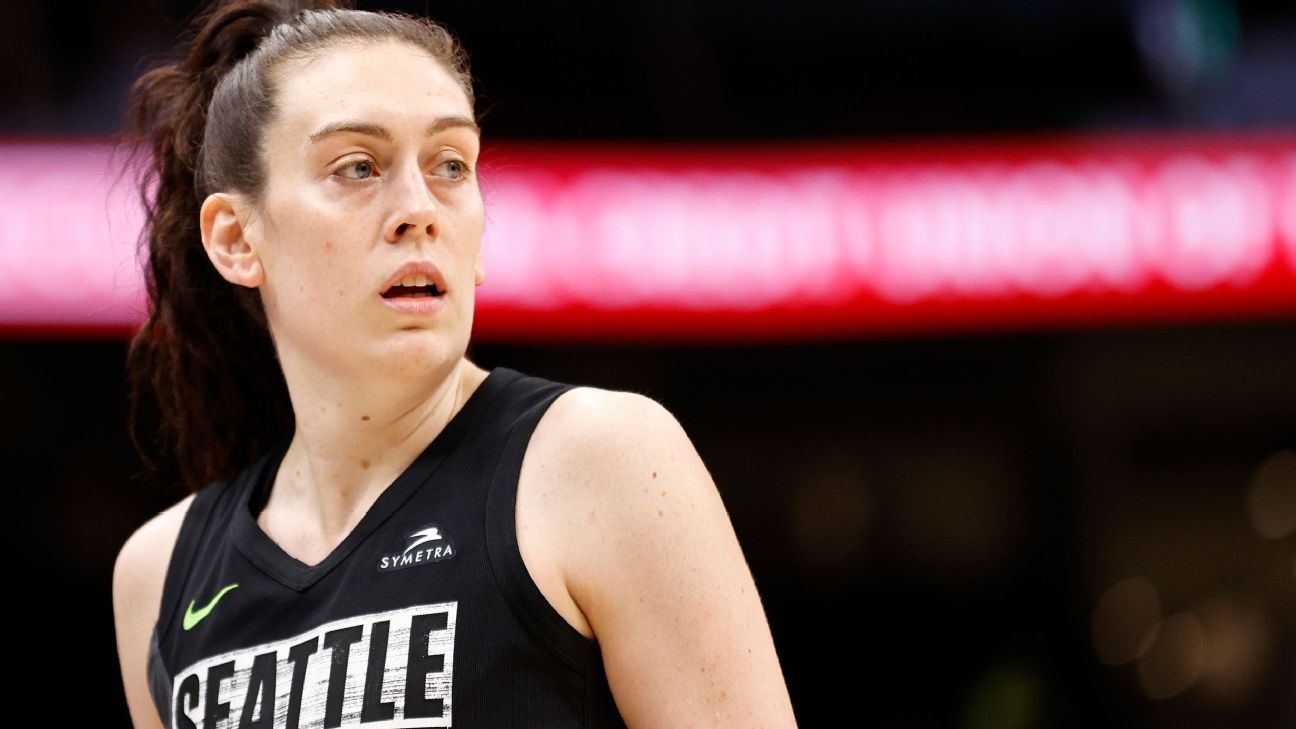 Breanna Stewart will met with the New York Liberty, Seattle Storm, Minnesota Lynx and Washington Mystics. How might those teams look with the unrestricted free agent on their roster in the 2023 season?

As we approach Saturday’s real opening of WNBA free agency, when players and teams can begin negotiating, all eyes are on the two-time Finals MVP and her cryptic emoji tweets, the latest of which ESPN’s Ramona Shelburne confirmed indicates Stewart’s planned meetings. As the top player available, Stewart’s decision could change the balance of power in the league.

It’s no surprise Stewart will meet with the Storm — who drafted her No. 1 overall out of UConn in 2016 and have since won a pair of WNBA titles — and again with the Liberty after taking a meeting with the franchise last offseason before returning to Seattle on a one-year deal. Additionally, Stewart will meet with the Lynx and Mystics, two of the WNBA’s most stable and successful franchises in recent years.

Let’s take a closer look at how we might project all four of these teams this season with Stewart — and any other additions via free agency.

Bird’s sendoff would have been a big deal anywhere. It was special because Bird played her entire WNBA career in Seattle, famously bypassing an opportunity to return home and play for the Liberty shortly before Stewart’s arrival.

“You can’t help but think about the way that Sue has been here her entire career,” Stewart said after last season, discussing her upcoming free agency, “the way this city always has her back and wanting that. It will be a decision that really Marta [Xargay, Stewart’s wife] and I will talk about for probably the next however many months and hopefully it will become a lot clearer for me.”

Of course, Bird’s retirement also leaves a gaping hole in the Storm lineup at point guard. To convince Stewart to stay, Seattle will have to recruit a replacement capable of keeping the team a contender. The ideal scenario would be signing Chicago Sky point guard Courtney Vandersloot, a Seattle-area native who met with the team last offseason before re-signing with the Sky, according to Annie Costabile of the Chicago Sun-Times. Shelburne reported that Vandersloot’s free agency “is expected to factor into Stewart’s decision.”

If not Vandersloot, the Storm would have a tough time replacing Bird’s production at age 41 in free agency. Restricted free agent Marina Mabrey of the Dallas Wings would be a younger option, or Seattle could target Stewart’s UConn teammate Moriah Jefferson, who averaged 10.8 PPG and 4.9 APG after joining the Minnesota Lynx last season and is a career 42% 3-point shooter.

With just two players under contract for 2023 (Jewell Loyd and Mercedes Russell), the Storm also have a hole to fill at small forward. Incumbent starter Gabby Williams, a restricted free agent, will be unable to play in the WNBA due to the new prioritization rules if her Asvel team advances to the finals of the French LFP playoffs as anticipated.

Although Seattle can bring back unrestricted free agent Stephanie Talbot, a key contributor off the bench the last two seasons, adding a small forward would make sense. Alysha Clark, who started for the Storm’s title teams in 2018 and 2020, is an unrestricted free agent. So too is Kia Nurse, another UConn teammate of Stewart’s who missed all of last season following an ACL tear.

Besides legacy, the best thing Seattle can offer Stewart is Loyd as a perimeter counterweight. The two stars have grown up together with the Storm. Of the 205 WNBA games Stewart has played, including playoffs, Loyd has played all but one (a regular-season win over Los Angeles in July 2021).

Stewart and Loyd have harmonized their games to seamlessly share responsibility for creating in the biggest moments.

“She gives me confidence to take shots and I have the same confidence in her,” Loyd said during last year’s playoffs. “I appreciate her friendship and us being teammates. It’s a privilege.”

In what could be their final game together, Loyd (29 points, a playoff career high) and Stewart (42, tying the WNBA playoff record) combined for the most points by teammates ever in the playoffs — breaking their own record from the 2020 title run. And yet, Seattle lost that game at home to the Las Vegas Aces, which raises the possibility Stewart might feel she needs more help to knock off the champs.

With the addition of 2021 MVP Jonquel Jones via trade earlier this week, the Liberty have plenty of help to offer. Because All-WNBA second team pick Sabrina Ionescu is in the final season of her rookie contract as the No. 1 pick (making $86,701 this season, per HerHoopStats salary data, which is also used for cap estimates) ) and Jones wanted a trade to New York, the Liberty are in position to team up three players from last year’s All-WNBA teams.

Along with reigning MVP A’ja Wilson, Jones and Stewart have been two of the league’s top three players over the past two seasons. Either Stewart (2018, 2020 and 2022) or Jones (2021) has led the league in my wins above replacement player (WARP) metric four of the past five years. And Ionescu finished third in WARP last season, one spot ahead of Jones.

Inevitably, playing together would limit the statistics Ionescu, Stewart and Jones would put up and require sacrifice from Stewart in particular. Still, Jones and Stewart would take their place among the great duos in WNBA history, with Ionescu as an incredibly strong third option.

Ionescu’s development last season is key to making the fit work. Among the 25 ball handlers who finished at least 100 pick-and-rolls with a shot, trip to the free throw line or turnover, her 0.89 points per play ranked third in the WNBA according to Synergy Sports tracking. Pairing that with Stewart, whose 1.08 points per play was third among the 17 screeners with at least 50 plays, would put opposing defenses in a bind.

The nightmare scenario for other WNBA teams is that New York could add Stewart and still not be finished. Signing Stewart for the max of $202,154 (a pay cut after she played last season at the higher supermax for players re-signing or acquired via sign-and-trade) would leave the Liberty with about $160,000 in cap room, which could increase to $180,000 if New York waived two players on non-protected contracts (Michaela Onyenwere and DiDi Richards). Would that be enough to sell Vandersloot on a UMMC Ekaterinburg reunion?

Howard Megdal reported Tuesday on the “Locked on Women’s Basketball” podcast that there’s mutual interest between Vandersloot and the Liberty. Given how Ionescu thrived after being moved off the ball last year with Crystal Dangerfield (sent to Dallas as part of the Jones trade) in the starting lineup, the fit makes sense for New York.

Vandersloot played with both Jones and Stewart for Ekaterinburg, and all three were part of the 2020-21 EuroLeague champions. That team was stacked with WNBA stars Brittney Griner, Emma Meesseman and Allie Quigley alongside them, but a Liberty lineup with Stewart and Vandersloot would undoubtedly be favored to win the 2023 title. Even adding Stewart alone could be enough to give New York the advantage on paper over the defending champion Aces.

If it happens, New York’s superteam status could be short-lived. Ionescu will be eligible for an extension that will boost her pay starting in 2024, while both Jones and Stewart must contend with the fallout of the prioritization rule requiring players to arrive for the start of training camp by then.

Stewart has been among the most outspoken critics of prioritization, while Jones told ESPN’s Alexa Philippou last year she intends to keep playing overseas. It’s possible neither Jones nor Stewart play in the WNBA in 2024.

Look back at some of Breanna Stewart’s best plays from last season as WNBA free agency looms.

The salary-cap math is more challenging for the Lynx. Minnesota could afford to sign Stewart outright at the lower max salary, but would be unable to offer any other free agent more than $76,000 — essentially the veteran minimum salary — with the No. 2 overall pick in this year’s draft factored into the equation.

Currently, the Lynx have five players under contract following Sylvia Fowles‘ retirement: wings Kayla McBride and Aerial Powers, along with Natalie Achonwa, Napheesa Collier and Jessica Shepard in the frontcourt. Using their cap space on Stewart would leave Minnesota without a true point guard on the roster, a need that wouldn’t likely be filled via the draft.

Because Collier and Shepard signed non-protected extensions last year, the Lynx could create additional cap space. That’s obviously a non-starter with Collier, an All-WNBA second team pick in 2020 just beginning her prime at age 26 after missing most of last season after giving birth. And Shepard’s contract, which pays $120,000 this season, is modest enough that waiving her would make little sense.

Instead, Minnesota’s pitch to Stewart would likely involve trading one of their veterans with protected contracts, either in exchange for a point guard or to create cap space to pursue one of them in free agency. The Lynx’s targets would likely look similar to the Storm’s. Costabile reported that Vandersloot took a meeting with Minnesota last year, while re-signing Jefferson would be an attractive fallback option.

Depending on the point guard, the Lynx’s roster would likely fall into a similar category as Seattle’s. With Stewart, Minnesota would be a championship contender, and would benefit from coach Cheryl Reeve’s experience in big games during four title runs with the Lynx from 2011 through 2017. However, Minnesota still wouldn’t likely be a title favorite.

When last we saw the Mystics, they were losing to Stewart and Seattle in the first round of a playoff series that was closer than the final 2-0 margin indicated. Washington threatened an upset in Game 1, which would have sent the series back to the DMV for the deciding Game 3.

With a relatively clean cap sheet bolstered by a starting center (2022 No. 3 pick Shakira Austin) on a rookie deal and this year’s No. 4 selection, the Mystics could comfortably handle Stewart’s max salary or even a supermax via sign-and-trade.

Depth would be the one question mark for Washington. Signing Stewart would likely prevent the Mystics from bringing back Clark, the incumbent starter forward next to Delle Donne, leaving Myisha Hines-Allen as the only veteran reserve making appreciably more than the league minimum.

Washington could add another wing with the No. 4 pick, giving first-year head coach Eric Thibault (taking over for his father, Mike, who remains the Mystics’ GM) the ability to replace Austin with that pick in smaller lineups, with Delle Donne and Stewart as the two post players that would be almost impossible to defend.

Last season, Washington’s defense was championship caliber, allowing the league’s fewest points on a per-possession basis. Adding Stewart, who finished third in Defensive Player of the Year voting, would only enhance that while dramatically upgrading what was a below-average offense hampered by shooting limitations.

Of course, there’s much more for Stewart to ponder during free agency than the quality of her team. She’ll weigh the idea of returning home to the East Coast against the roots she has put down in Seattle over the past seven years. But all four teams she meets with could both present intriguing options from a basketball standpoint.