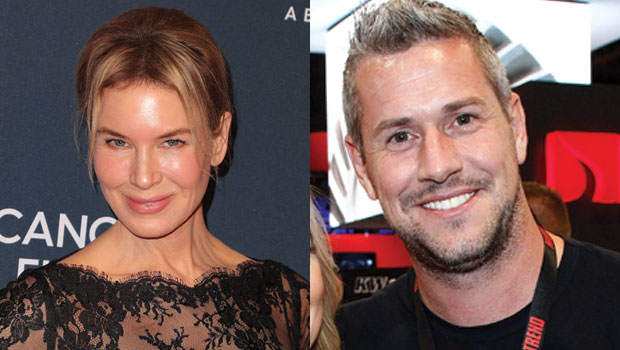 Renée Zellweger and Ant Anstead enjoyed a romantic bike ride in sunny California over the 4th of July weekend. The actress, 52, and the English TV presenter, 42, packed on the PDA while out and about in Laguna Beach, biking around the small coastal city and even stopping for a kiss. See the sweet photo of Renée and Ant HERE!

The bike outing comes after Hollywood’s newest couple were photographed spending time with Ant’s son Hudson, 1, whom he shares with ex-wife Christina Haack, on July 3. The two spent some time with the tot around Ant’s Laguna Beach home, attending a church service and visiting a vegan cafe. Renée and Ant first sparked romance rumors late last month; and over the long 4th of July weekend, the two were photographed for the first time together amid dating rumors, spending time together and laughing on Ant’s oceanfront property.

The couple reportedly met on the set of Discovery+’s Celebrity IOU: Joyride, a car spin-off series of Property Brothers Jonathan and Drew Scott‘s original HTGV hit show Celebrity IOU. Like the premise of the original, Joyride will follow stars as they  “roll up their sleeves to create automotive masterpieces for special people in their lives,” per the press release, and will feature stars Mary J. Blige, James Marsden, Octavia Spencer, Tony Hawk, Danny Trejo, and, of course, Renée in the first season.

The new coupling comes after Ant and Christina announced their separation in September 2020 after nearly two years of marriage. (The two officially filed the papers last November.) “Ant and I have made the difficult decision to separate,” Christina shared on Instagram. “We are grateful for each other and as always, our children will remain our priority. We appreciate your support and ask for privacy for us and our family as we navigate the future.”

As for Renée, the Judy actress last dated musician Doyle Bramhall II. The two split in 2019 after seven years (and even an engagement) together.

Shaima Reveals Why A Collab With The Weeknd Is Her Ultimate Goal: ‘I Have A Special Love For Him’

What to do this weekend.