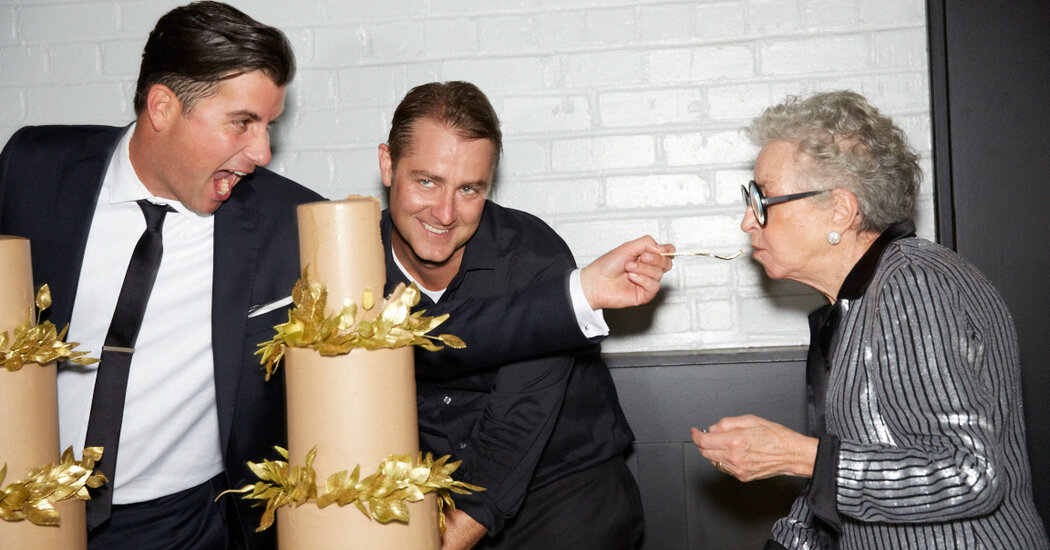 “Cakes are an iconic moment in a wedding,” Mr. Luscia added. The couple’s “represented how we saw our lives and how we saw ourselves: equals, standing side by side as we got married,” he said.

Ms. Weinstock attended the pair’s wedding as a guest, and later in the evening, before the cutting of the cake, she gave a speech. “She was standing behind her cakes, wearing a long, dressy shirt” that was silver and black, Mr. Luscia said. “She looked like a shining star. That’s who she was.”

“Our wedding cake was extravagant, stunning and elegant. It was six or eight tiers with hundreds of blush and pale pink edible flowers — peonies, roses and orchids — that matched the color of my bridesmaids’ dresses,” said Ms. Brown, who raises funds for charitable organizations. “The inside was chocolate with vanilla icing. The outside was all white.”

Ms. Brown added, “The cake was so tall that when it was wheeled out, it started to fall, but they caught it.”

The cake’s brush with gravity came after an even bigger scare: Weeks before the wedding, Mr. Sweetwood had a rare carcinoid tumor in his lung removed, and the couple didn’t know if they would have to postpone.

When the time came to cut the cake, Ms. Brown said, “Tears were running down our faces. The cake signified that scary, bad times were past us and the start of everything sweet and beautiful was ahead.”

So You Think You’re a Covid Expert (but Are You?)

After a Marathon First Date, a Warp-Speed Romance

Saris, Lehengas and Why Carrie Bradshaw Should Know the Difference

How Do We Tell Our Kids Why Their Uncle Is in Prison?

What to Wear in the Metaverse

At Prada, It’s in With the Old

Tiny Love Stories: ‘Be Grateful We Have Different Last Names’