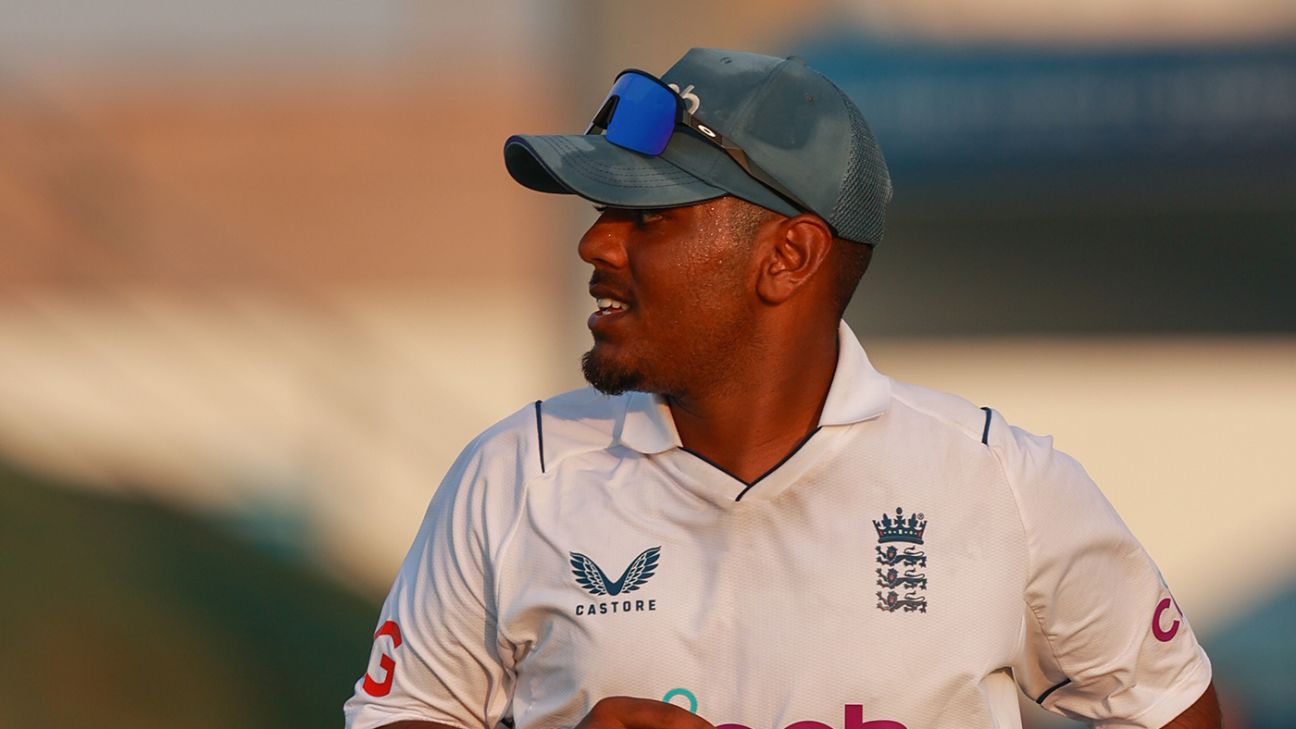 Rehan Ahmed, the 18-year-old legspinning allrounder from Leicestershire, has officially been added to England’s Test squad for the tour of Pakistan.
Ahmed, who has just three first-class appearances to his name, was originally due to travel to Pakistan as a net bowler, with the ECB taking a view in October that the experience would benefit one of the most exciting young talents in English cricket. Now, following an intense period of training with England Lions in the UAE, culminating in a warm-up match in Abu Dhabi against the Test side, he will tour in a more official capacity.

He was informed of his promotion to the full squad by Test coach Brendon McCullum at tea on first day of the fixture at Tolerance Oval, in which he bowled eight wicketless overs for 73 runs but took an excellent catch to remove Will Jacks, back-pedalling from cover, off the bowling of Dan Lawrence.

If selected, Ahmed, born on August 13, 2004, would become England men’s youngest-ever debutant, beating Brian Close’s 18 years and 149 days when he was picked for a Test against New Zealand in 1949. He would also be the first Leicestershire cricketer capped by the national team since August 2011, when James Taylor made his ODI debut.

“We know he’s not the finished article and has raw potential,” McCullum said on Ahmed’s selection. “But Ben [Stokes], myself and the rest of the coaches like how he approaches his game. The experience of being part of the squad in Pakistan will be hugely beneficial for him, and he will add to the make-up of our squad.”

The call-up is yet another big step for Ahmed in what has been a remarkable 18 months. His first taste of professional cricket came in 2021’s Royal London Cup, where he took five wickets in seven matches and, more impressively, averaged 44.50 with the bat. Then came a star-turn at the Under-19 World Cup with 12 dismissals in England’s run to the final where they were beaten by India.

He then capped off the end of the 2022 summer with a maiden first-class century and five-wicket haul against Derbyshire (112 and 5 for 114), underlining the quality he can offer in both disciplines. He was originally due to take part in the Pakistan Junior League – an Under-19 offshoot of the Pakistan Super League – but was pulled from the competition by the ECB when they decided to utilise him in the winter. With other franchise offers on the table, England have been proactive in steering him towards red-ball cricket – all the more necessary given a dearth of spin options in the longest format.

He will offer an alternative to the part-time spin of Liam Livingstone and Will Jacks, and gives England cover in the event they come across turning pitches in Pakistan given Jack Leach was the only frontline spinner picked in the original squad of 15.

While the tour of Pakistan is historic for England given it is 17 years since they last toured the country for a Test series, it will be equally significant for Ahmed.

“My dad is from Pakistan and I have family there, so I’ve been a few times,” Ahmed told ESPNcricinfo in October. “We’re from a place called Mirpur. Whenever I’ve been, I’ll go to the stadium and train and you’ll have a load of bowlers ready to bowl to you, and a load of batters ready to bat.

“Every time I’ve been, it’s always been great: the way they look after you there is crazy. It would mean the world to represent England in Pakistan. It would be great.”