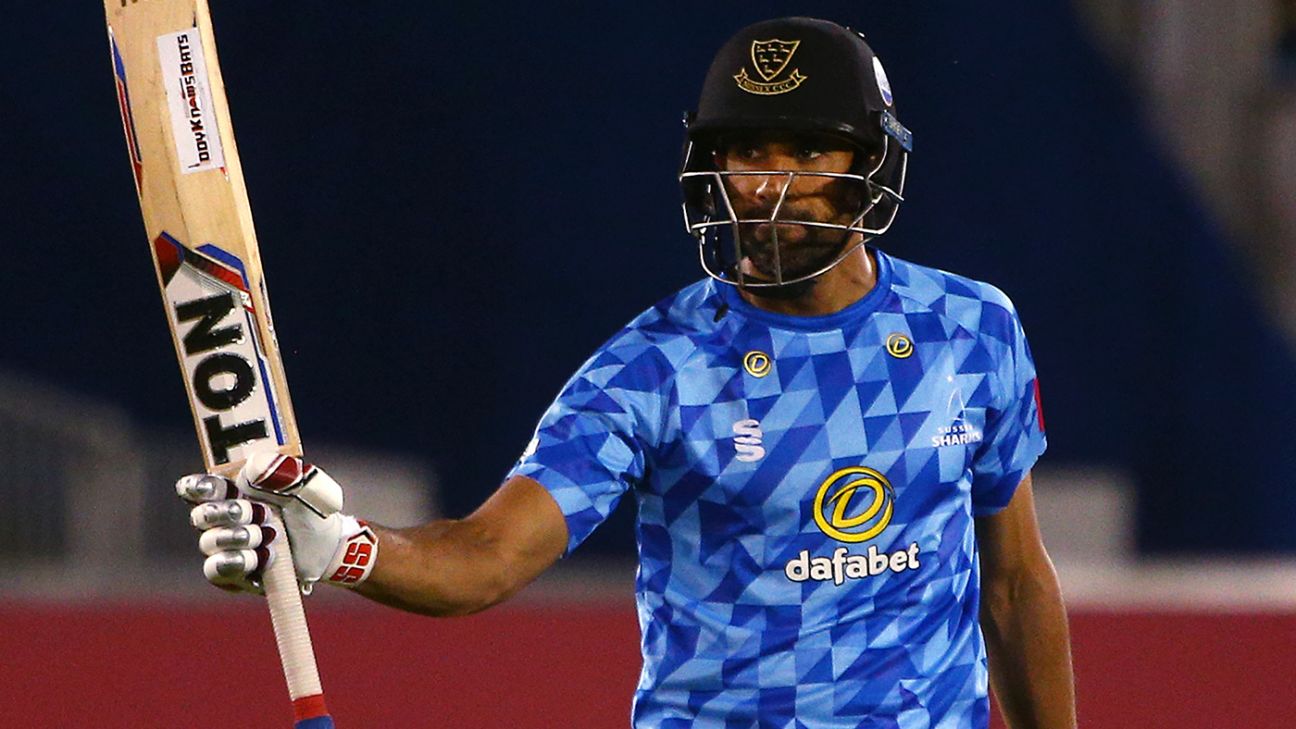 Ravi Bopara‘s captain’s innings of 54 not out off 36 balls at Hove helped Sussex Sharks to inflict a first defeat of the Vitality Blast campaign on Middlesex.
Bopara was joined in a decisive sixth-wicket unbroken stand of 58 in 6.5 overs by Harrison Ward as Sussex won a rain-affected contest by five wickets with three balls to spare to draw alongside their South Group opponents with a third victory – albeit having played one match more than Middlesex.

Ward hit Toby Roland-Jones over long on off the back foot for six in a 14th over costing 16 and in which both Ward and Bopara also collected legside fours.

And a crowd of more than 4,000 at the First Central County Ground lapped it up when, with 10 needed from the last over, Bopara swung Martin Andersson’s fast-medium high over long on and followed it next ball with a leg-glanced four to complete the win.

West Indian left-arm seamer Obed McCoy, meanwhile, claimed 4 for 30 in Middlesex’s 163 all out, in which Joe Cracknell hit two sixes and eight fours in a 49-ball 68.

Rain delayed the start of Sussex’s chase, leaving them to score 146 from 17 overs to win on Duckworth Lewis Stern regulations, and Roland-Jones struck with his first ball to have Luke Wright caught for 5 at deep mid wicket.

The Sharks were 20 for 2 when Jason Behrendorff bowled Ali Orr for 10 and an even shakier 37 for 3 as Roland-Jones returned to have Tom Alsop caught in the deep for 8.

New Zealand keeper-batsman Tim Seifert played attractively for a 21-ball 35 on his Sussex debut, with six fours and a six pulled off Luke Hollman’s leg spin, but he was leg-before to a Martin Andersson near-yorker and two overs later, in the 10th, Delray Rawlins was pinned lbw for 10 by Chris Green having just smeared the off spinner for six.

But Bopara and Ward made an equation of 46 from the last five overs look relatively simple, with Bopara finishing with a six and seven fours and Ward unbeaten on 22.

Earlier Steven Finn took 3 for 29 against his former county, striking with his first ball of the evening when Max Holden lifted a square drive straight to the fielder on the cover boundary to go for 5 in the second over.

Stevie Eskinazi also played well for 31, from just 18 balls, but after slashing Finn and driving Rawlins for sixes he fell to the last ball of Middlesex’s powerplay – making room to hit Finn away for what would have been a third four of the over but thin-edging instead to keeper Seifert.

Middlesex were 101 for two at the halfway mark of their innings, but instead of pushing on to something intimidating they fell away in disappointing fashion, losing their last eight wickets for 56 runs in 9.1 overs.

McCoy began the slump, picking up the wickets of Jack Davies and Andersson in his second over, the 11th. Left-hander Davies went for 14, slashing high to deep cover, and Andersson edged behind for 1.

Finn, with his first ball back, then made it 113 for 5 at the start of the 13th over when John Simpson, slicing a back-foot force, was spectacularly caught right-handed by a diving Wright at short third man to go for 2.

Cracknell did pick up Tymal Mills for six behind deep square leg, having earlier plundered three fours from McCoy’s opening over to take Middlesex racing past 50 in the fifth over, but later in that same 16th over the 22-year-old skied an attempted big hit against a slower ball and Mills accepted the caught and bowled.

McCoy removed both Hollman (5) and Roland-Jones (1) when recalled for over number 17, Rawlins catching them both, first on the cover ropes and then running in from deep mid wicket respectively.

Thilan Walallawita fell to Mills for a duck in the next over, weakly chipping to cover and Middlesex were still well short of par despite Green (22 not out) driving Mills for six and also pulling him for four in a final over in which the bowler later ran out non-striker and last man Behrendorff for 2 after stopping another Green drive – to leave two balls of the Middlesex innings unbowled.