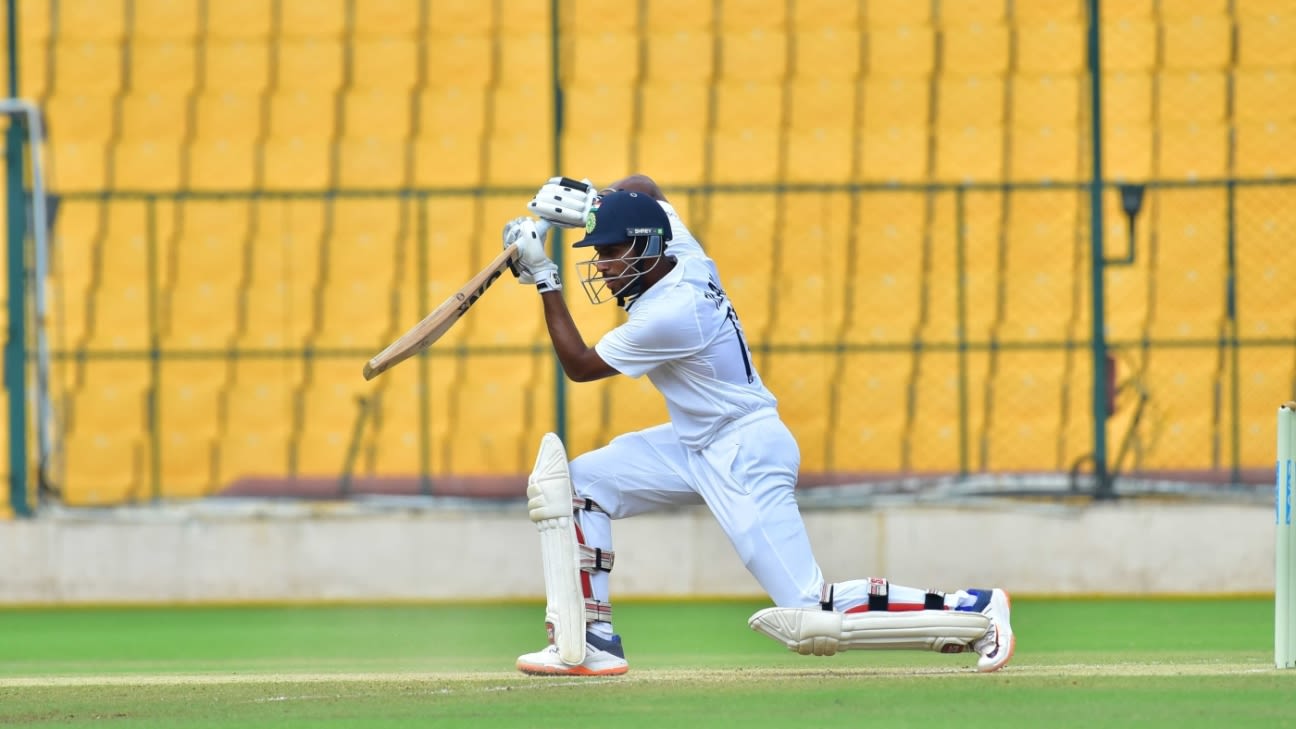 After Mukesh’s 5 for 86 helped bowl New Zealand A out for 400, Patidar led the way with 176 off 256 balls and found support from Easwaran and Varma. India A declared their first innings on 571 for 6 after securing a lead of 171 on the fourth and final day. Left-arm wristspinner Kuldeep Yadav then struck twice to dismiss Chad Bowes and Mark Chapman before the umpires signalled the end of the game with the visitors on 133 for 4.
New Zealand A’s first innings revolved around Joe Carter‘s career-best 197 after they had opted to bat. None of the other batters could even reach fifty with Mukesh turning out to be the wrecker-in-chief. The 28-year-old Bengal fast bowler, who was representing India A for the first time, struck at regular intervals to finish with a five-wicket haul.
The Indian batters then came out with positive intent with Easwaran and Priyank Panchal, the captain, adding 123 runs for the opening stand in 28.3 overs. Panchal fell just before stumps for 47 on day two to Rachin Ravindra, but Easwaran went onto notch up his 16th first-class ton on the third morning. He added 45 runs to his overnight score of 87 before falling to left-arm wristspinner Michael Rippon.
It was Patidar, though, who stole the show on day three. In the midst of a golden run across formats over the last six months, the 29-year-old brought up his ninth first-class century. Coming in to bat at 157 for 2, he first added 104 runs for the third wicket with Easwaran, 64 with Sarfaraz Khan for the fourth and then shared a 186-run fifth-wicket stand with Varma to take India A into the lead.
Patidar ended the third day on 170 but could only add six runs to his overnight tally falling to seamer Logan van Beek on the fourth morning. Varma, however, pressed on to bring up his maiden first-class century. He hit nine fours and six sixes during his 183-ball121 before his dismissal triggered India’s declaration. Ravindra was the pick of the bowlers for New Zealand A, taking 2 for 112 in 32 overs.

New Zealand A got off to a steady start in their second innings with Bowes and Ravindra putting on 51 runs for the opening wicket. Kuldeep and Yash Dayal left the visitors wobbling before the game ended in a draw.

The second unofficial Test between the two sides will take place in Hubbali from September 8.