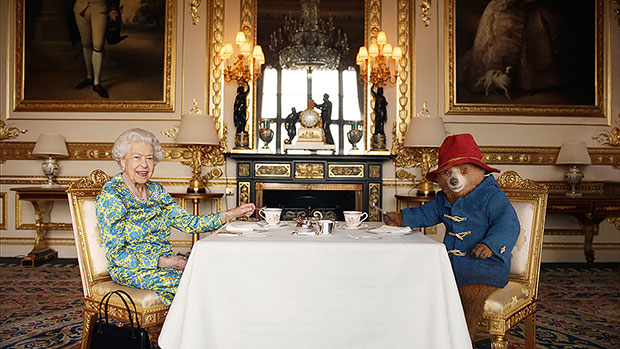 Queen Elizabeth made a surprise appearance in a comedic sketch involving the beloved Paddington Bear to start off the Platinum Jubilee concert. In the hilarious skit, the monarch sat across from the animated character as they planned to share a pot of tea.

“Thank you for having me. I do hope you’ll have a lovely Jubilee,” Paddington said, politely starting out the formal conversation. “Tea?” The Queen responded before the bear immediately grabbed the kettle and began chugging it unprompted. Upon realizing his mistake, he offered the rest to the her majesty, only to realize that the pot was practically empty.

To compensate, he then unexpectedly pulled out a marmalade sandwich out of his hat. “I always keep one for emergencies,” he commented. Then, in a whimsical twist, the 96-year-old mimicked his actions. “So do I,” she quipped, reaching for her purse. “I keep mine in here.”

As the crowd began to erupt in cheers, signaling that the concert was about to start, Paddington tipped his hat, honoring Queen Elizabeth’s 70-year reign. “Happy Jubilee, ma’am. And thank you for everything.” While “We Will Rock You” by Queen played in the background, the two then tapped along to the beat with their teacups in a sentimental moment.

What occurred next was an electrifying performance from Queen + Adam Lambert, who also did renditions of other hits such as “We Are The Champions” and “Don’t Stop Me Now.” Alicia Keys also made an appearance at the concert, belting out her signature songs such as “Superwoman” and “Girl On Fire,” while effortlessly playing the piano.

To close out the four-day event, Motown legend Diana Ross then took the stage, her first time performing in England since 2007. There, she crooned over soulful chorus members while singings the tunes “Chain Reaction,” “Thank You,” and finally, “Ain’t No Mountain High Enough.”

Other well known artists performing during the exciting night were Sir Elton John, Rod Stewart, and Duran Duran. The event was help for a whopping 22,000 audience members, and took place at the iconic Buckingham Palace.