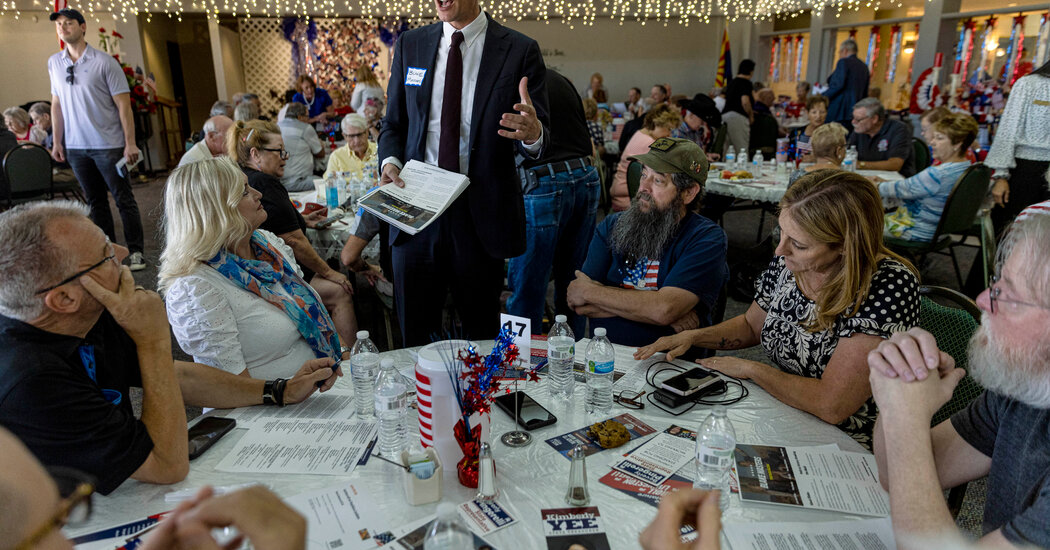 Brian Hughes, the co-founder and associate director of the Polarization and Extremism Research and Innovation Lab at American University, said he was not surprised to see the far right cheering Mr. Masters on.

“If a candidate is pointing toward the ideas that make up replacement theory, he or she doesn’t have to spell it out in the ugliest terms; the message gets across,” Mr. Hughes said. “Because of the broader political context that is taking place here — which includes mass murder — the dog whistles are much more effective. You’re playing with fire when you play footsie with these ideas.”

Mr. Masters isn’t the only Republican Senate candidate who has played on voters’ fears about immigration. Adam Laxalt, a former Nevada attorney general who won the state’s Republican primary last month, has struck a similar theme, telling supporters at an event in rural Nevada last year that illegal immigration was part of a Democratic strategy.

“It’s scary, scary stuff — 200,000 people pouring over the border every single month,” Mr. Laxalt said. “Is the media covering this wall to wall? Of course not. Because this is what the left wants. The left wants to radically transform this nation, and they want to destroy the values that made this country a great nation.”

The message is not a centerpiece of Mr. Laxalt’s campaign, and he has focused on Hispanic outreach, starting a “Latinos With Laxalt” campaign in Las Vegas in March with a mariachi band and free tacos. “The Republican Party represents the Latino community,” he said at the event. “We have shared values, and we need better messengers.”

Jesus Marquez, a Laxalt adviser, said that Mr. Laxalt’s remark last year was aimed at Democratic immigration policies, not at Latinos, and that the campaign was continuing its outreach to Hispanic voters, particularly in Las Vegas. “Latinos want security,” Mr. Marquez said. “They care about securing our border.”

Never Before in American History: The F.B.I. Searches a Former President’s Home

With Deal in Hand, Democrats Enter the Fall Armed With Something New: Hope

Republican governors criticize the Mar-a-Lago search as ‘unprecedented’ and ‘un-American.’

What’s in the Climate, Tax and Health Care Package

Liz Cheney Is Ready to Lose. But She’s Not Ready to Quit.

After 246 Years, Marine Corps Gives 4 Stars to a Black Officer

Biden Tests Negative for Coronavirus but Will Keep Isolating

In the Philippines, Blinken Vows to Strengthen Military Ties