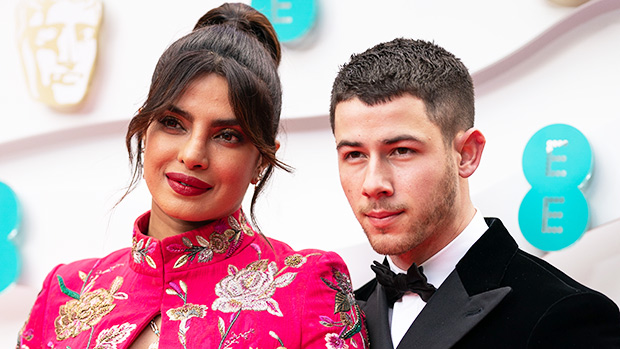 Priyanka Chopra stunned in a sexy new red dress, perfect for summer, with her husband Nick Jonas. The popstar posted the sweet photo of himself and his wife on his Instagram on Wednesday, August 3. Nick, 29, sweetly posed alongside Priyanka, 40, and he wrote about how beautiful he found her in the caption, where he wrote, “Lady in red,” along with a heart emoji.

The Matrix Resurrections star looked beautiful in the bright red strapless, cutout dress with a matching pair of open-toed heels and carried a purse that matched. She held onto Nick’s wrist, and he wrapped his other arm around his wife’s waist. The Jonas Brother rocked a bright pink jumpsuit with a geometric pattern all over it with a pair of white sneakers.

Priyanka’s gorgeous “Lady in red” look isn’t the only recent shot that the couple have posed for. The pair had a sweet couples photoshoot, promoting Perfect Moment, a luxury sportswear brand. The pair showed off a bunch of different stylish outfits in the promos released in July.

The couple also recently enjoyed a family vacation to Cabo San Lucas, as they celebrated Priyanka’s 40th birthday. During the getaway, Priyanka also gave a look at the couple’s infant daughter Malti, 6 months, in a sweet photo of the parents with their little girl. As the pair were on vacation, the couple were spotted relaxing on the beach in their perfect summerwear. Nick sported a black cutoff tee, shorts, and baseball cap, while the actress rocked a yellow ensemble over a matching bikini, as they enjoyed a nice conversation together.

While Nick and Priyanka enjoyed the vacation for her birthday, it seems like the pair are also loving being new parents also! After welcoming Malti in January via surrogate, sources close to the couple have revealed to HollywoodLife exclusively that they’re thinking of growing their family! “They’ve always known they wanted more than one because having a big, close family is the most important thing to both of them,” one insider said.