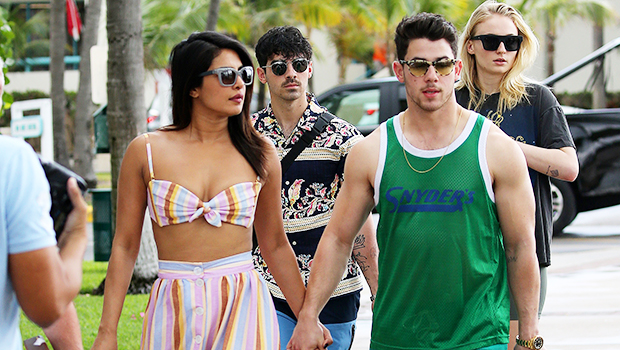 Priyanka Chopra, Nick Jonas, and their daughter Malti Marie enjoyed a sunny day at the beach in Malibu on Sunday, January 22. The actress, 40, singer, 30, and their one-year-old daughter looked like they were having a great day as they soaked in some sun. The Matrix Resurrections star shared the photos of herself and her family on her Instagram with a simple caption: “Sunday” along with white heart, prayer hands, and heart-eyes emojis.

The first shot showed the whole family. Nick and Priyanka both rocked dark colors while Malti sported a cute yellow onesie. The Baywatch actress sported a black sweater as she held her daughter, and Nick rocked a black puffer vest over a gray sweater along with a red cap. The second photo featured a closeup of Priyanka and Malti looking out at the water as the actress sported a brown tanktop. The last shot showed the whole family standing down on the beach.

The outing came one day after Malti’s first birthday, earlier in January The pair welcomed their daughter via a surrogate in January 2022. Nick and Priyanka’s daughter was born prematurely and had to spend the first 100 days of her life in the NICU. The Jonas Brother opened up about throwing her a special party during an appearance on The Kelly Clarkson Show. He said they wanted to go all out after her struggles early on. “She went through a pretty wild journey in the early part of her life, and so we had to celebrate in style,” he said.

The beach outing also came shortly after Priyanka was featured in British Vogue, including some shots of her cradling her daughter in matching red outfits. As she has in many of her social media photos, the actress carefully hid her daughter’s face. In the interview, she opened up about how her relationship with her daughter has changed her outlook. “Now I feel I have a centre, a sense of calm, because every decision ends up being about her,” she told the outlet. “There’s really nothing more satisfying than seeing her face as soon as her eyes open.”