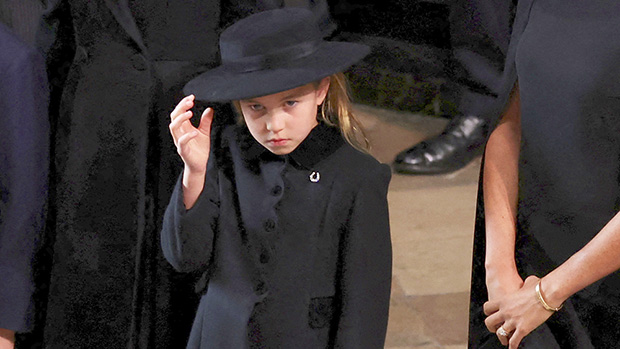 The Queen began horseback riding when she was just a toddler, and was often photographed riding horses throughout her 70-year tenure as Queen. In her 96th birthday portrait, The Queen posed alongside two of her horses, proving that her love of the animals transcended into her later years of life, as well.

The tribute was similar to that of Princess Charlotte’s mother, Kate Middleton, who also honored The Queen with her jewelry at the event. Kate wore a pearl necklace and diamond earrings from The Queen’s own collection. She had previously borrowed both pieces from Her Majesty in the past, so it was the perfect way to honor her.

At 7 years old, Charlotte was old enough to attend the funeral alongside her parents — Kate and Prince William — and older brother, Prince George. The family’s youngest child, Prince Louis, 4, was not in attendance. Charlotte was well-behaved as she sat next to her mother at the service, following along as hymns were sung. For the first time ever, she also wore a hat while attending the ceremony.

For years, fans have raved over how much Charlotte’s looks take after her great-grandmother’s. The Queen, who was 96, passed away on Sept. 8 at Balmoral Castle in Scotland. However, the funeral was not until 11 days later, following a period of mourning in the U.K. The Queen will be buried alongside her late husband, Prince Philip, who passed away in April 2021 at the age of 99.