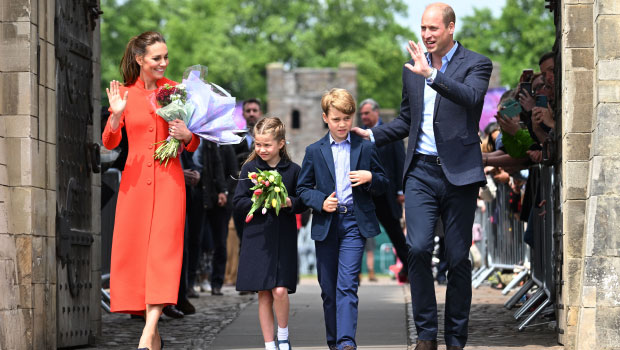 Princess Charlotte, 7, looked as happy as could be during her latest appearance at Queen Elizabeth II‘s Platinum Jubilee. The young royal stepped out in a navy blue coat over a blue and white patterned dress as she visited Wales with her parents, Kate Middleton and Prince William, and older brother, Prince George, 8, for the days long festivities. She had her hair down with some strands pulled back and braided on both sides of her head and wore white socks with flat shoes that matched her outfit.

Charlotte’s big smile seemed to prove she was having a great time greeting people outside with her family as she held her mom’s hand and a bouquet of flowers. Kate, 40, wore a red coat over a dark dress and heels while William, 39, wore a navy blue blazer over a light-colored button-down top, dark pants, and dark laced shoes. George’s outfit matched his dad’s, and the cute brood posed for photos at one point while putting their arms around each other.

The Duke and Duchess of Cambridge’s family’s latest Jubilee outing comes after the Queen also made headlines for her a newly released incredibly gorgeous portrait. In the photo, she sat and posed in a light blue long-sleeved coat and skirt set with white embroidery on the collar area and down the middle. She also wore pearls and flashed a smile for the camera.

The photo was released amid this year’s Jubilee, which marks the 70th year the Queen has been on the throne of England. In addition to her grandson William’s family attending the festivities, the Queen’s other grandson Prince Harry‘s family attended, making it their first royal event since moving away from England back in 2020. Harry’s wife Meghan Markle and children, Archie, 3, and Lilibet, who turned one on June 4, reportedly met with the Queen during their visit and the parents of two were spotted dressed to impress during the Trooping of Colour event.

The Duke and Duchess of Sussex’s visit also marks the first time the Queen met her great granddaughter Lilibet, who is named after her. The meeting reportedly took place on the same day as the Service of Thanksgiving on Friday. “Of course, we know the Queen went back to Windsor Castle yesterday, the couple went back to Windsor as well where they’re staying at Frogmore Cottage. So that would have been the first moment or the first chance for her to meet her namesake,” royal commentator Omid Scobie said on BBC Breakfast on June 3.