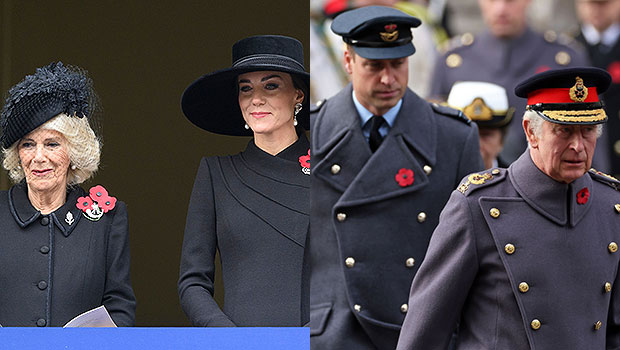 During the appearances, William wore a classic suit and striped tie while Kate wore a black blazer and matching skirt. She had her hair down and accessorized her look with a pearl necklace and dangling earrings. The King also wore a classic black suit with a patterned tie. They wore sleek and military-style black coats as well for the second part of the event.

Other attendees of Remembrance Day included King Charles’ sister, Princess Anne, as well as his wife, Camilla, Queen Consort. The former wore a black blazer dress and the latter wore a black dress with accents and a V-neckline in front. They flashed smiles every once in a while as they took in the memorable and bittersweet moments and appeared comfortable to continue the tradition without the late Queen.

Just one day before William and Kate attended Remembrance Day with their family, they were seen enjoying a lunch at a pub near Windsor Castle. They were next to Maggie Caxton, who was celebrating receiving her OBE (Officer of the Order of the British Empire) and her company took to Twitter to tweet about the surprise encounter.

“Congratulations to our chair, Maggie Saxton, who received her OBE from Princess Anne at Windsor Castle yesterday,” the North East Learning Trust wrote alongside a photo of Maggie receiving the honor. “Maggie was thrilled to attend the ceremony and in particular, to find herself sitting beside the Prince and Princess of Wales in the local pub afterwards!”