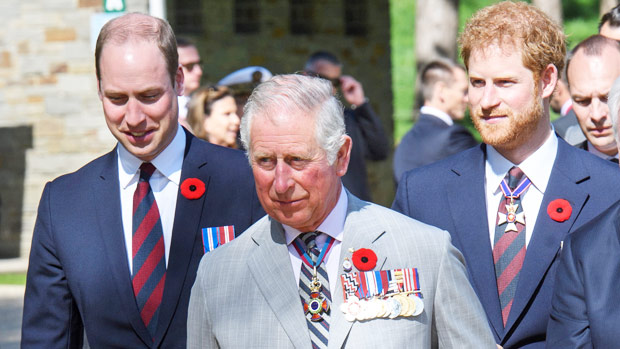 Prince Harry opened up about whether he was on speaking terms with his brother Prince William and father King Charles during his interview with Anderson Cooper on 60 Minutes on Sunday, January 8. The bombshell interview covers so many of the different topics that Harry, 38, wrote about in his new, upcoming memoir Spare, and he also gave an update on where he stands with his dad, 74, and brother, 40.

When Anderson asked Harry whether he was speaking to William currently or even texting, the Duke of Sussex explained that it had been “a while” since they spoke. “Currently, no, but I look forward to—I look forward to us being able to find peace,” he said.

The journalist then asked whether he was speaking to King Charles, and similarly, he said the pair haven’t spoken “recently,” while explaining that he was leaving it up to his family to reach out. “We haven’t spoken for quite a while,” he said. “The ball is very much in their court.”

Harry also said he doesn’t see himself and his wife Meghan Markle making a full-time return to the Royal family, but he did say that he wants to have an important sit-down with his family. “Meghan and I have continued to say that we will openly apologize for anything we did wrong, but every time we ask that question, no one’s telling us the specifics or anything,” he said. “There needs to be a constructive conversation. One that can happen in private that doesn’t get leaked.”

Despite not currently speaking to his brother and dad, Harry has spoken about wanting to reconcile with both Charles and William in another interview with ITV’s Tom Bradby. “I would like to get my father back. I would like to have my brother back,” he told the outlet. In the 60 Minutes interview, Harry said he “looks forward” to having relationships with his dad and brother again.

During the interview, Harry also reflected on a number of other topics related to the Royal family, including his mother Princess Diana’s death in 1997, how he wasn’t invited on a plane to go to say goodbye to the late Queen Elizabeth as she was passing, and the brothers asking Charles not to marry Queen Consort Camilla.