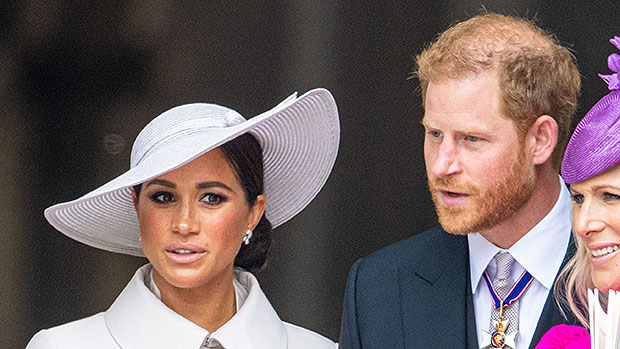 Just a few days away from the official release of Prince Harry’s highly anticipated memoir Spare, excerpts from the tome claim King Charles III banned Harry’s wife, Meghan Markle, from visiting Queen Elizabeth as she lay dying in her home at Balmoral Castle in Scotland. Harry said he told his father in response, “Don’t ever speak about my wife that way,” according to reports following the accidental early sale of the book in Spain, per ABCNews.

The Duke and Duchess of Sussex were visiting London on September 8, 2022 when the call came for the couple to make haste to Balmoral to see Harry’s dying grandmother, according to the DailyMail. After an initial announcement from Harry’s reps said he and Meghan would be making the trip to Scotland, the plan was changed a few hours later; Harry ended up flying on a private jet to Balmoral alone and arrived shortly after the Queen’s death was announced.

As for why Meghan was not allowed to accompany her husband, a source for the DailyMail said it was all about keeping the circle around the Queen as private and small as possible. The insiders claimed Prince William’s wife Kate Middleton was also asked not to come to Balmoral. “Charles told Harry that it wasn’t right or appropriate for Meghan to be in Balmoral at such a deeply sad time,” the source explained. “It was pointed out to him that Kate was not going and that the numbers really should be limited to the very closest family.”

The news come after a slew of explosive excerpts from Spare have already leaked, with the most sensational being that Harry and William allegedly had a physical fight over Meghan. Harry claimed that William had called Meghan “rude” and “abrasive” during a heated meeting in 2019. “He grabbed me by the collar, ripping my necklace, and he knocked me to the floor. I landed on the dog’s bowl, which cracked under my back, the pieces cutting into me. I lay there for a moment, dazed, then got to my feet and told him to get out,” he wrote.

Meanwhile, HollywoodLife will keep you posted on the upcoming interviews with Prince Harry and the all the juicy details that will emerge when Spare is finally released on January 10!