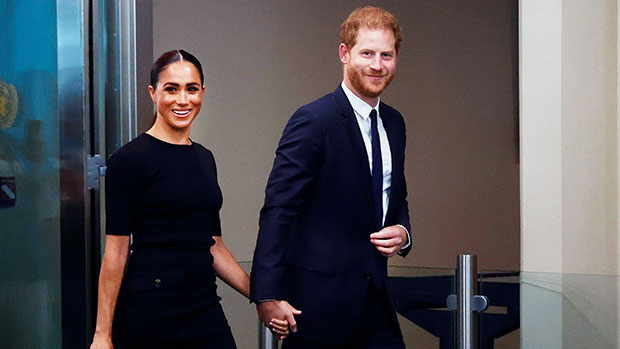 Prince Harry and Meghan Markle are back in England for the One Young World summit where the former actress will be making the keynote speech on Monday (September 5). In their first visit to the UK since the Queen’s Platinum Jubilee, the Sussexes were spotted boarding a train from London to Manchester, where the event is taking place in Bridgewater Hall. Prince Harry looked dapper in a navy suit jacket, while Meghan was sophisticated and chic in a light brown ensemble, as seen in photos here.

Meghan is expected to address the 2,000+ young leaders from around the world on gender equality. “One Young World invites young adults from all over the world who are actively working to transform the socio-political landscape by being the greater good,” Meghan has said in a previous statement, according to the organization’s website. “They are delegates who are speaking out against human rights violations, environmental crises, gender equality issues, discrimination and injustice. They are the change.”

While the couple are back in England, there are reportedly no plans for them to out meet up with other members of the royal family, including Prince Harry’s brother Prince William, his sister-in-law Kate Middleton, his father Prince Charles and the Queen herself, per The Telegraph. Most notable, however, is the fact that Prince William and Kate live about a half a mile away from where Prince Harry and Meghan are staying in Windsor, per the outlet.

During their last UK visit, the itinerary was much different. Prince Harry & Meghan took their 3-year-old son Archie and 1-year-old daughter Lili to visit with their grandfather Prince Charles and it was reportedly a heartwarming family reunion. The couple even stopped at Buckingham Palace to say hello to Harry’s grandmother, Queen Elizabeth, who also met Lili for the first time. “Being with her, it was great. It was just so nice to see her,” Harry said of the visit on Today. “She’s on great form. She’s always got a great sense of humor with me. It was really nice to catch up with her.”