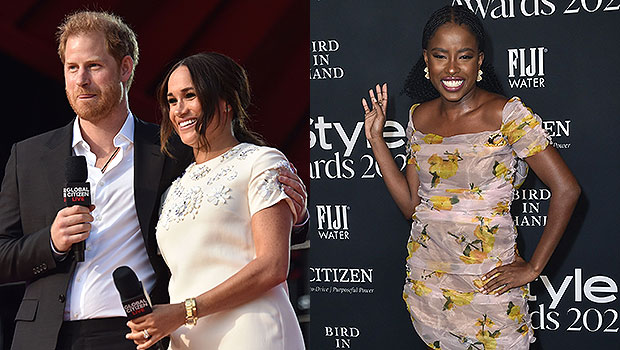 Prince Harry, 38, and his wife, Meghan Markle, 41, flashed huge smiles when they posed for a photo alongside poet Amanda Gorman, 24, via Instagram on Nov. 23. “Beyond thrilled to have had the honor of speaking with The Duchess on her podcast, Archetypes, where I spoke on the power that women possess as changemakers. Thank you so much for having me!”, the 24-year-old captioned the post, along with a yellow heart emoji. In the snapshot, the Duchess of Sussex opted for a casual, yet chic, ensemble that included a white short-sleeve top, a fuzzy wool cardigan, blue jeans, and a brown belt. The Hill We Climb author rocked a bright and colorful top, gold hoop earrings, and a gold necklace. And Harry, for his part, kept it casual with a simple black t-shirt.

This week, Meghan welcomed Loot actress Michaela Jaé Rodriguez, 31, and Sex and the City author Candace Bushnell, 63, on her podcast, Archetypes, for the “Beyond the Archetype: Human Being” episode. Towards the very end of the interview, the 41-year-old welcomed Amanda as a surprise guest, to share a poem about women’s strengths. “There is a movement brewing. We are the storm, the very form of change. The way forward isn’t a road we take but a road we make,” Amanda began. “Forged forth by a future that is female. We will not fail, we will not sway/For where there’s will, there’s woman/And where there’s woman, there is forever a way.”

After the young poet read her beautiful poetry, Meghan gushed about how amazing it was. “It’s so good! I mean, did you guys hear that? ‘And where there’s women, there is forever a way.’ Truer words have never been spoken,” the mom-of-two said. “Thank you Ms. Amanda Gorman.” And, of course, the brunette beauty closed out her podcast with a perfect song for the episode, which was Emmy Meli‘s hit track “I AM WOMAN.”

Earlier in the episode, MJ spoke to Meghan about what “traits” she thinks about when it comes to women and how “we move through the world.” The Pose star said, “Immense strength, and, more than anything, being resilient.” She also added that women have “so much” on their plates. “Not only just being women, but if we’re of color, there’s just another added layer,” MJ said before adding, “And then obviously, if you’re trans or a part of a different demographic, but resilience – the fact that we can even in the worst of odds, triumph – is what Womanhood is.”

Amanda is not only a poet and author, but is also known for famously delivering a powerful poem at President Joe Biden‘s 2021 inauguration. In addition, she is the nation’s youngest poet laureate, and has received numerous accolades to her name, including awards from College Women of the Year and the Webbys. And most recently, on Nov. 16, she was nominated for a Grammy Award for her spoken word poetry album, Call Us What We Carry.

Prince Harry’s Memoir ‘Spare’: 1st Photo Of The Cover, Release Date & Everything Else We Know