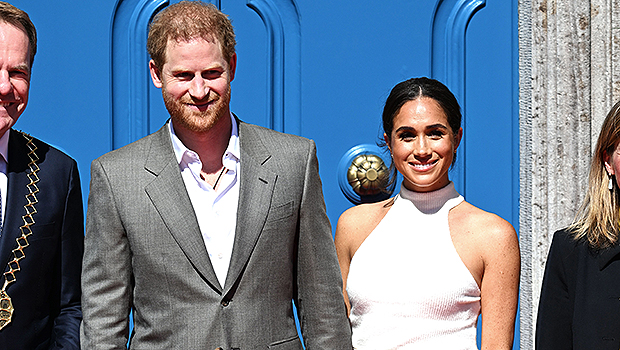 Prince Harry and Meghan Markle were the picture perfect couple as they arrived at the Invictus Games One Year To Go event in Germany on Sept. 6. The two arrived at the celebration holding hands, with Meghan gazing lovingly at Harry. She looked simple, but sophisticated, in her high-waisted, belted pants and tight white halter top. Meghan’s sleek look was complete with her hair in a low bun and simple, diamond earrings. Meanwhile, Harry was dapper as ever in his grey suit.

The couple, who currently live in California, returned overseas for some work obligations over Labor Day weekend. On Sept. 5, they attended the One Young World summit, where Meghan was the keynote speaker. She stunned in a red jumpsuit at the event, and delivered an inspiring message to the crowd in attendance. Harry was by her side for the Manchester event, marking the pair’s first return to the United Kingdom since Queen Elizabeth II’s Platinum Jubilee in June.

Meghan and Harry’s European tour will continue after the Invictus Games event, when they head back to the U.K. for the WellChild Awards on Sept. 8. Their two children, Archie, 3, and Lilibet ,1, do not appear to have joined them for the travels this time around. However, during the reunion with Harry’s family in June, Lilibet was introduced to her grandfather (Prince Charles) and great-grandmother (Queen Elizabeth II) for the first time.

Harry has had a bit of a strained relationship with his brother, Prince William, and father, Prince Charles, since he and Meghan decided to step down from their royal duties and move to America in Jan. 2020. Harry and Meghan’s tell-all interview in March 2021 with Oprah Winfrey about life in the royal family further increased the tension. The men have been working on building back their relationship, but do not appear to have spent any time together amidst Harry and Meghan’s latest Europe visit.